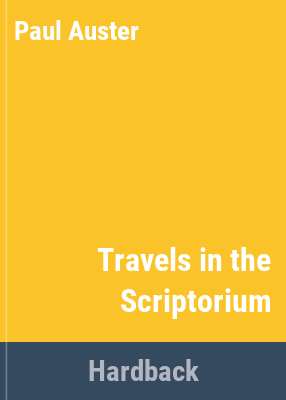 An old man awakens in a room he doesn't recognize and begins reading a mysterious manuscript seemingly left there for him. Kafkaesque? No, Austeresque. With a national tour; reading group guide. (c) Copyright 2010. Library Journals LLC, a wholly owned subsidiary of Media Source, Inc. No redistribution permitted.

On the centennial year of Samuel Beckett's birth, Auster's new novel nods to the old master. We open with a man sitting in a room. The man doesn't remember his name, and a camera hidden in the ceiling takes a picture of him once a second. The man whom the third-person narrator calls Mr. Blank spends the single day spanned by the book being looked after, questioned and reading a fragmentary narrative written by a man named Sigmund Graf from a country called the Confederation who has been given the mission of tracking down a renegade soldier named Ernesto Land. During the course of the day, a former policeman, a doctor, two attendants and Mr. Blank's lawyer visit the room, and Mr. Blank learns he is accused of horrible crimes. (His lawyer claims he is accused of everything "from conspiracy to commit fraud to negligent homicide. From defamation of character to first-degree murder.") But this may or may not be true the narrative veers toward ambiguity. While Auster's lean, poker-faced prose creates a satisfyingly claustrophobic allegory, the tidy, self-referential ending lends a writing-exercise patina to the work. (Feb.) (c) Copyright PWxyz, LLC. All rights reserved

Auster, a literary descendent of Kafka and Borges, is fascinated by the very act of storytelling. Consequently, his novels always involve some form of doubling as one story coils within another. In the wake of The Brooklyn Follies0 (2006), an expansive novel, Auster presents a spare, metaphysical fable. Mr. Blank, Auster's protagonist, is confined to an austere room, uncertain of his status or the room's location. Names carry great weight in Auster's uncanny fiction, and so it figures that Mr. Blank has lost his memory. His keepers have provided him with a stack of photographs of people who seem dimly familiar and with a typescript written by another prisoner in another time and place. As Mr. Blank reads this compelling account of violence and loss in the Confederation, a land that vaguely resembles nineteenth-century America during the genocidal assault against indigenous peoples, various visitors arrive, claiming to be Blank's victims. But what are his crimes? Auster fans will recognize a parade of characters from earlier works, reaching back to his famed New York Trilogy 0 (1985-86), In the Country of Last Things 0 (1987), 0 and Leviathan 0 (1992), as Auster coyly celebrates the power of the imagination and marvels over the labyrinthine nature of the mind in an archly playful and shrewdly philosophical tribute to the transcendence of stories. --Donna Seaman Copyright 2006 Booklist

Rarely has a novelist pulled the strings of his puppetry more transparently, as ardent fans may find this meta-fictional fable profound, while others may dismiss it as a literary parlor trick. With a Kafkaesque protagonist in an M.C. Escher plot, Auster (The Brooklyn Follies, 2005, etc.) returns to the themes of identity, memory, illusion and creativity that have marked his work since his breakthrough New York Trilogy (The Locked Room, 1986, etc.). During that period, he was regarded as a sort of metaphysical mystery writer, a reputation he lives up to here. The protagonist is nameless except as "the old man," until author and reader make a compact to refer to him as "Mr. Blank," which immediately becomes the name by which other characters know him. Those characters then invoke the names of others recycled from Auster's fiction (Benjamin Sachs, David Zimmer, Fanshawe, Quinn), whom Mr. Blank is supposed to know but doesn't. Except for vague memories and dreams, he knows nothing. He has been committed to or incarcerated within a room that is the totality of his environment, or perhaps he is there by choice. Everything in the room carries a label ("lamp," "desk," etc.), for his command of the connection between language and reality (whatever that is) is tenuous. There are photographs on the desk that might well spark clues to his identity, and a manuscript that purports to be the memoir of a previous occupant of this very room. Visitors come and go: a doctor, a former inspector, a lawyer and others, some of whom may have had some connection with Mr. Blank, none of whom he remembers and most of whom he will forget as soon as they leave. Otherwise, nothing much happens, until the novel culminates in Mr. Blank's discovery of another manuscript with which the reader will be quite familiar. Though some will find that the illumination within the final three pages justifies the existential tedium preceding it, others will agree with Mr. Blank, who is "not the least bit amused" and wonders, "When is this nonsense going to end?" Copyright ©Kirkus Reviews, used with permission.
More book reviews at iDreamBooks.com