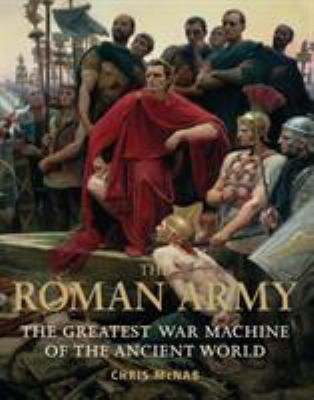 The Roman Army : the greatest war machine of the ancient world / edited by Chris McNab.

<p>The image of the Roman legionary is as familiar today as it was to the citizens - and enemies - of the vast Roman Empire two thousand years ago. This book goes beyond the stereotypes found in popular culture to examine the Roman Army from the first armed citizens of the early Republic through the glorious heights of the Imperial legions to the shameful defeats inflicted upon the late Roman Army by the Goths and Huns. Tracing the development of tactics, equipment and training, this work provides a detailed insight into the military force that enable Rome to become the greatest empire the world has ever seen.<br> <br> As well as describing the changes in the army over the centuries, The Roman Army also sheds light on the talented men who led these soldiers in battle and the momentous battles fought, including Cannae, Pharsalus, and Adrianople. Illustrated with detailed maps, artwork and photographs, this volume provides a complete reference to the Roman Army from the 8th century BC to the period after the fall of the Western Roman Empire in the 5th century AD.<br> <br> Hardback edition ISBN: 9781849081627</p>