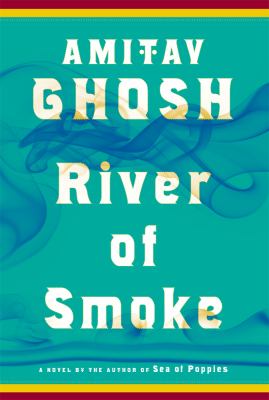 BookPublisher: New York : Farrar, Straus and Giroux, 2011Description: 522 pages ; 24 cm.Content type: text Media type: unmediated Carrier type: volumeISBN: 9780374174231.Subject(s): Schooners -- Fiction | Opium trade -- History -- Fiction | Cyclones -- Fiction | Sailors -- Fiction | India -- Social conditions -- 19th century -- FictionGenre/Form: Historical fiction.Summary: Amid a cyclone in the Bay of Bengal, three vessels, and the diverse occupants within, converge on Canton’s Fanqui-Town, or Foreign Enclave, which is a powder keg awaiting a spark to ignite the Opium Wars.
List(s) this item appears in: 9. Your Best Reads of 2017
Tags from this library: No tags from this library for this title. Log in to add tags.
Fiction notes: Click to open in new window

The Ibis , loaded to its gunwales with a cargo of indentured servants, is in the grip of a cyclone in the Bay of Bengal; among the dozens flailing for survival are Neel, the pampered raja who has been convicted of embezzlement; Paulette, the French orphan masquerading as a deck-hand; and Deeti, the widowed poppy grower fleeing her homeland with her lover, Kalua.

The storm also threatens the clipper ship Anahita , groaning with the largest consignment of opium ever to leave India for Canton. And the Redruth , a nursery ship, carries Frederick "Fitcher" Penrose, a horticulturist determined to track down the priceless treasures of China that are hidden in plain sight: its plants that have the power to heal, or beautify, or intoxicate. All will converge in Canton's Fanqui-town, or Foreign Enclave: a tumultuous world unto itself where civilizations clash and sometimes fuse. It is a powder keg awaiting a spark to ignite the Opium Wars.

Spectacular coincidences, startling reversals of fortune, and tender love stories abound. But this is much more than an irresistible page-turner. The blind quest for money, the primacy of the drug trade, the concealment of base impulses behind the rhetoric of freedom: in River of Smoke the nineteenth and twenty-first centuries converge, and the result is a consuming historical novel with powerful contemporary resonance. Critics praised Sea of Poppies for its vibrant storytelling, antic humor, and rich narrative scope; now Amitav Ghosh continues the epic that has charmed and compelled readers all over the globe.

Amid a cyclone in the Bay of Bengal, three vessels, and the diverse occupants within, converge on Canton’s Fanqui-Town, or Foreign Enclave, which is a powder keg awaiting a spark to ignite the Opium Wars.

Sequel to: Sea of poppies.

In this second novel of a planned trilogy, Ghosh (Sea of Poppies) takes up the threads of some of his previous novel's characters and weaves them into the hodgepodge, heterogeneous mix that is Canton before the Opium Wars. The novel ostensibly follows Bahram Muddie, a prominent Zoroastrian opium trader from Bombay, who has borrowed heavily to make his first trip to Canton as an independent merchant and who finds his life and livelihood put on hold as the Chinese government cracks down on the drug's import. It is Fanqui town, the city's international trade district, that is the book's real center and, indeed, main character. Ghosh writes like a man who wandered into the library and never made it out again: readers hear more about the city's fabulous dishes than his character's inner lives (though only a writer of his caliber could make caterpillers sound so appetizing). Many of his characters are pulled straight from the history books, and, overburdened by research, the novel becomes an unusually eloquent, animate Wikipedia article. Verdict Despite the lackluster plot, Ghosh's Canton really does come alive; the book's 500-plus pages go fast.-Molly McArdle, Library Journal (c) Copyright 2011. Library Journals LLC, a wholly owned subsidiary of Media Source, Inc. No redistribution permitted.

Find a story line-there are a number of them-in the second installment of Ghosh's Ibis trilogy (after the Booker Prize-shortlisted Sea of Poppies) and hang on for dear life or risk being lost at sea in this tour of mid 19th-century south Asia. This crowded novel is in turn confusing and exhilarating, crammed with chaotic period detail and pidgin languages. Three ships barely survive an Indian Ocean cyclone in late 1838. Their passengers, each possessing a secret, wash up in Canton (now Guangzhou), China. They are as varied as the region, among them the disgraced young raja, Neel; the Parsi opium trader, Bahram; his bastard Chinese son, Ah Fatt; the Cornish botanist, "Fitcher" Penrose; and the French orphan, Paulette. Neel becomes Bahram's scribe; Paulette becomes Fitcher's assistant, even though Canton bars foreign women from entry. The prelude to the opium wars plays out, as the Chinese emperor tries to resist British arguments for free trade to support their role in the drug trade. The fallout from the soured diplomacy creates obstacles to Penrose's research as well as to the personal fates of Bahram and the others. Ghosh is a highly imaginative, articulate writer. The dialects he mimics are delightful, as are the vignettes and asides that make up the bulk of this book. But a stronger plot would have helped the reader navigate all the sampans and samosas, opium dreams and camellias. (Oct.) (c) Copyright PWxyz, LLC. All rights reserved.

*Starred Review* Spellbinding and astute, Ghosh continues the nineteenth-century historical saga about the opium trade that he launched with Sea of Poppies (2008). This is an even more fluid and pleasurable tale, however dire its conflicts, and stands firmly on its own, though readers shouldn't miss the first installment. After escaping misery and danger in India, Ghosh's seductive, motley crew of struggling characters has found some semblance of sanctuary in China. Paulette is discovered living in the ruins of a botanical garden by the famous plant-hunter, Fitcher Penrose. They join forces to search for a rare camellia with help from Robin, who finally finds happiness as a gay man in Canton's industrious art world. Neel, the disgraced intellectual raja, is working for Bahram, a well-meaning, wealthy, now-imperiled Indian merchant with an illegitimate Chinese son and a doomed opium business. Ghosh's fascination with the multicultural ferment of Canton inspires thrilling descriptions of everything from local cuisine to the geopolitics of the opium wars. And his delight in language, especially the inventiveness of pidgin, further vitalizes his canny and dazzling tale, which, for all its historical exactitude, subtly reflects the hypocrisy and horrors of today's drug trafficking. With one more novel to go, Ghosh's epic trilogy is on its way to making literary history.--Seaman, Donna Copyright 2010 Booklist

At the center of the novel is Bahram Modi, whose humble origins in India belie his current status as a shipper of opium. But Ghosh threads multiple plots through his narrative, most of them having to do with the consequences of a severe storm in the Indian Ocean. Not only does this storm disrupt Bahram's shipment of opium on theAnahita, it also threatens theIbis, a ship whose "cargo" includes indentured servants, criminals, a French orphan (who later helps horticulturist Fitcher Penrose identify exotic plants in China) and a pair of lovers, Deeti and Kalua. When we're not at sea trying to survive this monstrous storm, Ghosh takes us to Canton, China, the center of commerce, intrigue and corruption. Every character is on a quest for something: a valuable plant, a romance or a fortune. As with Dickens, Ghosh gives us an anatomy of the social world from the highest levels to the lowest, from the emperor of China to the river rats haunting the harbor of Canton, and his amazing ear finds a languagefrom pidgin English to Cornish dialectappropriate for each character. Along the way we meet businessmen such as Bahram, whose judgment is perhaps clouded by a surfeit of opium.Ghosh triumphs both through the clarity of his style and the sweep of his vision, and he leaves the reader eager for volume three.]] Copyright Kirkus Reviews, used with permission.
More book reviews at iDreamBooks.com