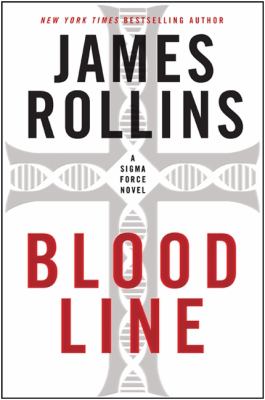 Genre/Form: Action and adventure fiction.DDC classification: 813/.54 Summary: A yacht bearing a young American couple is attacked by Somali pirates, leading to bloodshed and the violent kidnapping of the pregnant woman on board. To aid in her rescue from the lawless and war-torn jungles of coastal Africa, Sigma Force enlists the aid of a unique search team.
Tags from this library: No tags from this library for this title. Log in to add tags.
Fiction notes: Click to open in new window

"One of the most inventive storytellers writing today"
--Lincoln Child, bestselling co-author of Gideon's Corpse

"The modern master of the action thriller."
--Providence Journal-Bulletin

Bloodline, a breathtaking Sigma Force thriller from the phenomenal James Rollins, is further proof that, when it comes to explosive adventure and nail-biting suspense, this New York Times bestselling author is one of the very best in the business! Bloodline is a lightning-paced, unputdownable international thriller chock-full of the trademark elements that have propelled Rollins to the top of virtually every national bestseller list: cutting-edge science ingeniously blending with history and nonstop action. A relentlessly exciting tale that races across the globe, Bloodline ensnares popular series hero Commander Gray Pierce in a deadly conspiracy involving Somali pirates, the kidnapped daughter of the U.S. Vice President, and a dark secret hiding in the human genetic code. This is mystery, suspense, surprise, and ingeniously inventive storytelling as only James Rollins can do it.

A yacht bearing a young American couple is attacked by Somali pirates, leading to bloodshed and the violent kidnapping of the pregnant woman on board. To aid in her rescue from the lawless and war-torn jungles of coastal Africa, Sigma Force enlists the aid of a unique search team.

The prologue for this complexly woven tale, the eighth entry in the "Sigma Force" series, could have come from the History Channel-one of the original Knights Templar, a woman to boot, finds the staff of Christ, which holds the key to immortality. Fast-forward to the present day and the descendants of the group, which include the U.S. President, continue the quest for immortality, only they are now using modern technology. The President's daughter is kidnapped, and there is an assassination plot brewing. Painter Crowe's Sigma Force is called upon to protect the commander in chief and get to the bottom of the plot. Peter Jay Fernandez does well in reading this work. His voice is quite relaxed and is usually measured during the narrative sections. He affects individual voices for the numerous characters, which succeeds in relating the player's personality. VERDICT Public libraries that have the earlier works in this series should purchase this one, while others also may wish to consider buying it. [The Morrow hc was a New York Times best seller.-Ed.]-Michael T. Fein, Central Virginia Community Coll., Lynchburg (c) Copyright 2012. Library Journals LLC, a wholly owned subsidiary of Media Source, Inc. No redistribution permitted.

Rollins' eighth thriller featuring the covert U.S. intelligence agency known as Sigma Force (after The Devil Colony) is of a piece with its predecessors-it's fast-paced, full of twists, and thick with intrigue. Beginning strong with an engaging preface discussing the shadowy history of the Knights Templar and 21st-century medical breakthroughs with the potential to make immortality possible, Rollins rewinds to the 12th-century recovery of the Bachul Isu, the staff of Jesus Christ. Just a few pages later, Rollins presses fast-forward again to "Five Days from Now," when Commander Gray Pierce of the Sigma Force has U.S. President James T. Gant in the crosshairs of his sniper rifle. The rest of the novel explains how things got to such a pass, starting with the abduction-apparently by pirates-of President Gant's pregnant daughter, Amanda, off the Seychelles. The narrow escapes and betrayals between Amanda's kidnapping and Gant's imminent assassination are unsurprising, but the momentum of the plot will carry along those looking for an exciting escape. (June) © Copyright PWxyz, LLC. All rights reserved.

In the Seychelles, a woman is taken by Somali pirates. It soon becomes apparent that her kidnappers are no ordinary pirates: they seem unusually interested in the child she's carrying. And here's a further complication: the woman is the daughter of the U.S. president. Sigma Force, the special-ops arm of the Defense Advanced Research Projects Agency (DARPA), races into action, but they have no idea what they are up against, or what's at stake, until it's almost too late. As usual, Rollins mixes the action with healthy doses of historical mystery and modern-day conspiracy (this time involving the Bachal Isu, otherwise known as the Staff of Jesus, and the quest for immortality). Fans of Rollins' brand of adventure will completely enjoy the latest in the Sigma Force series, while newcomers attracted, perhaps, by the ripped-from-the-headlines Somali pirates element should immediately be swept up by his fast-paced storytelling style (short chapters, short paragraphs, minimal scene-setting narration, plenty of action). Rollins is a proven commodity, with a large fan base, and his latest hits all the right notes.--Pitt, David Copyright 2010 Booklist

Rollins returns with another Sigma Force thriller. Rollins delivers more by-the-numbers mayhem. Cmdr. Pierce travels to Zanzibar to recruit Capt. Tucker Wayne and his war dog Kane, a Malinois. Wayne wants no part of Pierce, his mission or Sigma Force, a supersecret organization affiliated with the Defense Advanced Research Projects Agency. The mission: rescue Amanda Gant-Bennett, daughter of James Gant, POTUS. Somali pirates have taken Amanda hostage. Do the pirates know who their hostage is? What evil designs do they have on the baby? Are the British Special Forces on their side? The plot points appear with the regularity of mileposts. Love and gunpowder are in the air. Seichan, Asian assassin extraordinaire, used to kill for the Guild, a shadowy organization with ancient roots and ill intentions. Having defected to the good guys, she bats her lashes at Pierce and flashes dagger-eyes at the evildoers. The stogie-chewing, wisecracking Kowalski is the lovable oaf in residence. From Takoma Park, Md., and Washington D.C., to Somalia, Dubai, the Carolinas and points between, the team hurries, the time zones helpfully noted. A predictable tale in which the hits, and the blood spatter, just keep coming. ]] Copyright Kirkus Reviews, used with permission.
More book reviews at iDreamBooks.com