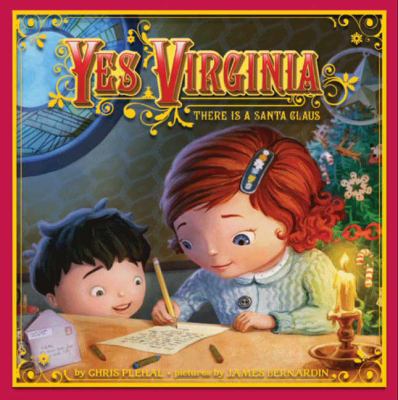 Yes, Virginia : there is a Santa Claus / Chris Plehal ; illustrated by James Bernardin.

In 1897, eight-year-old Virginia O'Hanlon wrote the New York Sun to ask a simple question: Is there a Santa Claus? The editor's response was a stirring defense of hope, generosity, and the spirit of childhood. His essay has been reprinted countless times since, and the phrase "Yes, Virginia, there is a Santa Claus" has become part of American Christmas lore.

Based on these actual events, Yes, Virginia is the story of a little girl who taught a city to believe.

In 1897 New York City, a young girl who knows that Santa Claus exists sets out to prove her case to unbelievers by writing a letter to the editor of the New York Sun.

Believers still take heart in the true account of eight-year-old Virginia O'Hanlon's 1897 letter to the New York Sun asking if Santa Claus exists-and the resounding affirmative reply printed. Plehal dramatized these events for a 2009 animated TV special and adapts his version to picture book form. If some of the plotting stretches credibility (such as the discovery of Virginia's discarded letter in the trash), the combination of Bernardin's comically exaggerated characters and Plehal's modern, relatable dialogue gives the story some freshness. Ages 3-7. (Oct.) (c) Copyright PWxyz, LLC. All rights reserved.