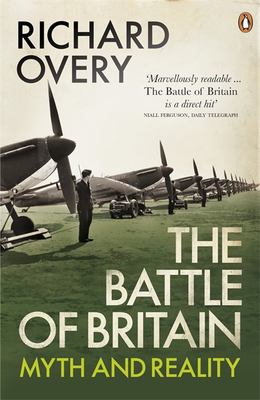 The Battle of Britain : myth and reality / Richard Overy.

From the award-winning author of The Dictators , Richard Overy's The Battle of Britain: Myth and Reality is the best introduction available to a defining moment in British history.

The extraordinary struggle between British and German air forces in 1940 was one of the pivotal events of the Second World War. How close did Britain really come to invasion during this time? What were Hitler and Churchill's motives? And what was the battle's real effect on the outcome of the war?

'It is harder to imagine a sounder and more succinct account of the Battle of Britain'
Max Hastings, Evening Standard

'No individual British victory after Trafalgar was more decisive in challenging the course of a major war than the Battle of Britain ... the best historical analysis in readable form which has yet appeared on this prime subject'
Noble Frankland, The Times Literary Supplement

' The Battle of Britain is hard to beat'
Saul David, Sunday Telegraph

'Succeeds brilliantly ... along the way a lot of myths bite the dust'
Time

Richard Overy has spent much of his distinguished career studying the intellectual, social and military ideas that shaped the cataclysm of the Second World War, particularly in his books 1939 - Countdown to War , Why the Allies Won , Russia's War and The Morbid Age . Overy's The Dictators: Hitler's Germany, Stalin's Russia won the Wolfson Prize for History and the Hessell Tiltman Prize.