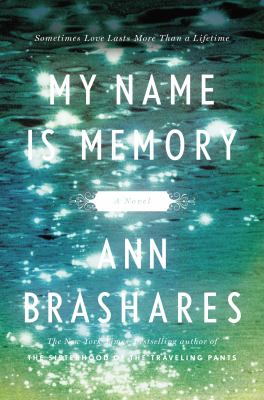 My name is memory / Ann Brashares.

From the New York Times -bestselling author of The Sisterhood of the Traveling Pants and The Last Summer (of You and Me) comes an imaginative, inspired, magical book-a love story that lasts more than a lifetime.

Daniel has spent centuries falling in love with the same girl. Life after life, crossing continents and dynasties, he and Sophia (despite her changing name and form) have been drawn together-and he remembers it all. Daniel has "the memory", the ability to recall past lives and recognize souls of those he's previously known. It is a gift and a curse. For all the times that he and Sophia have been drawn together throughout history, they have also been torn painfully, fatally, apart. A love always too short.

Interwoven through Sophia and Daniel's unfolding present day relationship are glimpses of their expansive history together. From 552 Asia Minor to 1918 England and 1972 Virginia, the two souls share a long and sometimes torturous path of seeking each other time and time again. But just when young Sophia (now "Lucy" in the present) finally begins to awaken to the secret of their shared past, to understand the true reason for the strength of their attraction, the mysterious force that has always torn them apart reappears. Ultimately, they must come to understand what stands in the way of their love if they are ever to spend a lifetime together.

A magical, suspenseful, heartbreaking story of true love, My Name is Memory proves the power and endurance of a union that was meant to be.

Most of us recycle everyday without giving it much thought. But what if we were recyclable? Daniel, who thinks of himself as a recycled soul, is different from everyone else-he remembers all his past lives. For over 1000 years, he's been learning how actions in one life affect the next and discovering that not everyone who returns has good intentions. But most of all, he remembers Sophia, despite her changing name and form, and while Sophia can't quite remember him, she's inexplicably drawn to get as close to him as she can. Although circumstances keep them apart time and time again, Daniel has mastered patience and has boundless faith that one day they will live a lifetime together. VERDICT Brashares's second adult novel (after The Last Summer [of You and Me]; author of the YA "Sisterhood of the Traveling Pants" series) is reminiscent of Audrey Niffenegger's The Time Traveler's Wife, and Daniel and Sophia's near misses and chance encounters captivate and entrance us. [See Prepub Alert, LJ 3/1/10; national tour.]-Jennifer Anderson, Texas A&M Univ.-Corpus Christi Lib. (c) Copyright 2010. Library Journals LLC, a wholly owned subsidiary of Media Source, Inc. No redistribution permitted.

A romance that stretches across centuries and past lives constitutes the core of Brashares's varied second adult novel, the first in a planned trilogy. The story is primarily that of Daniel, as, in the present, he pursues Lucy (whom he knows as Sophia in a previous life) and attempts to persuade her of their history and destiny, but his passion initially and understandably scares her off. He disappears, presumed dead, but Lucy, unable to forget him, investigates his claims of their history until she discovers the truth. Meanwhile, Daniel takes readers on a tour of romantic near-misses, from sixth-century Africa through eighth-century Turkey to WWI. The story moves slowly and predictably, though when a plot finally materializes, Brashares (Sisterhood of the Traveling Pants) manages some satisfying momentum, even if the story begins to feel like it's borrowed from a James Patterson novel. Brashares's insights into human nature, meanwhile, should appeal to readers who enjoyed The Time-Traveler's Wife, but can appreciate a Nicholas Sparks-esque sensibility. (June) (c) Copyright PWxyz, LLC. All rights reserved

On the heels of recent film adaptations of F. Scott Fitzgerald's The Curious Case of Benjamin Button and Audrey Niffenegger's The Time Traveler's Wife, Brashares' second novel for adults taps into the growing appetite for romances thwarted by extraordinary tricks of time. Virginia high-school student Lucy is inexplicably drawn to classmate Daniel, but when he claims to have known her before, a thoroughly unsettled Lucy flees. Gradually, Lucy learns the impossible truth: Daniel has been chasing her through ages and lives for 1,200 years. In chapters that alternate viewpoints between the two lovers, past and present, the couples' unrequited desire builds, even as a murderous soul threatens their reunion. Steamy bedroom scenes aside, the coming-of-age sensibility will feel familiar to crossover adult fans of Brashares' best-selling Traveling Pants series for teens. Readers tantalized by the possibilities of past lives and soul-mate connections will devour this unabashed romance, which has the heart-pounding pace and tone of a beach novel, and hope for the sequel hinted at in the open ending. Suggest John Fowles' The French Lieutenant's Woman (1969) while they wait.--Engberg, Gillian Copyright 2010 Booklist

Primarily known for her young adult Traveling Pants series, Brashares offers her second adult novel (The Last Summer (Of You and Me), 2007), about a man who remembers his past lives and the woman he's loved through them all.In 2004, Virginia high-school student Lucy develops an obsessive crush on a mysterious new classmate, Daniel. They finally share a kiss at the Senior Ball, but then Daniel calls her Sophia and insists that they have loved each other for centuries. A frightened Lucy runs away, leaving Daniel bereft. He has spent most of his many lives trying to find Sophia, ever since their disastrous first meeting during his first remembered life. As a soldier in North Africa in the sixth century he mistakenly burned down a house (think civilian casualties in Afghanistan), causing a little girl version of Sophia to diehis "original sin." Two hundred years later in Asia Minor, Daniel helped the woman her soul then inhabited escape from her abusive husband, Daniel's older brother Joaquim, who then killed him. Throughout the centuries when Daniel and Sophia have met, their ages or circumstances usually kept them apart. However, during World War I Sophia/Constance was his nurse and sweetheart at a British military hospital where she hid a letter of explanation about Daniel to her future self. Fast forward to 2006. Attending college, Lucy has lost track of Daniel. Then a psychic shocks her by bringing up Daniel by name. Now driven to find the truth through hypnosis and the Internet, Lucy finds the WWI letter and accepts her pasts. But she can't find Daniel. Unfortunately, menacing Joaquim is on Daniel's trail too. Plenty of grown up "Pants" fans will swoon for this hokey but undeniably effective romance, and an ambiguous ending leaves the door ajar for a sequel.]] Copyright Kirkus Reviews, used with permission.
More book reviews at iDreamBooks.com