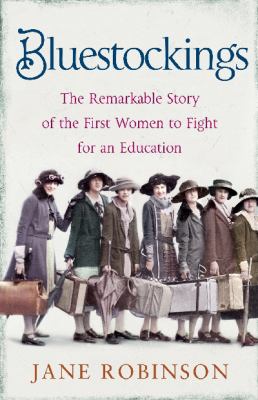 Bluestockings : the remarkable story of the first women to fight for an education / Jane Robinson.

In 1869 Emily Davies signed the lease on a house in the small market town of Hitchin, and made history. In years to come, she would be joined by others and would move to larger accommodation in Girton, nearer to the town of Cambridge. But at first there were only five young women in her care- the first women ever to study a degree course at an English university.

At the time, the average female brain was thought to be 150 grams lighter than a man's, and the country's leading doctors warned that if women studied too hard their wombs would wither and die. Almost thirty years later, when the Cambridge Senate held a vote on whether women students should be allowed official membership of the university, there was a full-scale riot.

Despite the prejudice and the terrible sacrifices they faced, women from all backgrounds - from well-read debutantes bored by domesticity to hard-working servants from impoverished families - persevered and paved the way for the generations who have followed them since. By 1900 sixteen per cent of all students were women, studying at universities throughout Britain; by the 1920s, being an 'undergraduette' was considered quite the fashionable thing; by the 1930s, women were emerging from universities as anything from aviation engineers to professional academics.

Using the words of the women themselves, Bluestockings tells their inspiring story - a story of defiance and determination, of colourful eccentricity and at times heartbreaking loneliness, as well as of passionate friendships, midnight cocoa-parties and glorious self-discovery.