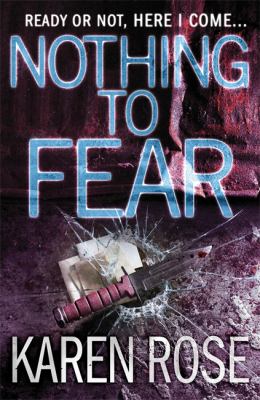 Nothing to fear / Karen Rose.

A killer's game is just beginning: NOTHING TO FEAR is a fantastic thriller from bestselling author Karen Rose, and part of the Chicago series.

Sue Conway is out of control. Recently released from prison she is determined to find the people responsible for putting her there and to give them a taste of what she has had to endure. When Sue kidnaps an eleven-year-old deaf boy it's only the first stage in an elaborate plan.

Running to Chicago, Sue poses as a battered woman and it leads her to Hanover House, an inner-city women's shelter, run by Dana Dupinsky. Dana safeguards many secrets in her own life and in the lives of those around her but she would never harbour a murderer, that is if she knew that one was living at the shelter.

Distracted by the presence of a new man in her life, Dana only realises the danger when those around suddenly start dying and she is thrust into the middle of Sue's dangerous and evil game...