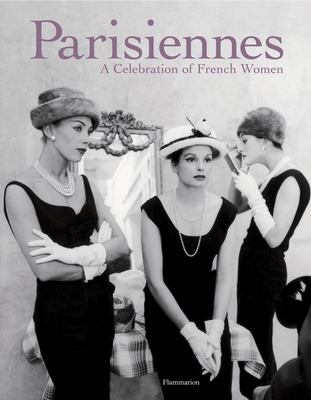 Parisiennes : A celebration of French women / [photographs by Edouard Boubat ... [and others] ; essays by Carole Bouquet ... [et al.] ; translated from the French by Louise Lalaurie Rogers] .

Divided by theme into chapters, this light-hearted and nostalgic romp through 20th-century Paris creates a beautiful history of the world's most romantic city and its exceptional women. This collection of one hundred and thirty duotone photographs captures the essence of the Parisian femme fatale. All of the great French photographers from the late 1930s through the 1960s are featured, including Robert Doisneau, Brassaï, Willy Ronis, Jacques-Henri Lartigue, Edouard Boubat, Jean-Philippe Charbonnier, Sabine Weiss, and many more. The photographs reveal Parisian women and all of their glorious facets: from the love-struck waif strolling along the banks of the Seine to the belles of the neighborhood balls flushed from their raucous dance moves, from no-nonsense career girls to flirty neighbors. Chanel-clad locals and runway models alike showcase the glamour of the fashion and haute-couture world with inimitable style. One chapter pays homage to the courageous women who battled for justice in World War II, the Resistance, the Liberation, and the revolts of May 1968, including role models such as philosopher and writer Simone de Beauvoir and journalist and playwright Marguerite Dumas. The Parisiennes featured here go to work, ride bikes, pose seductively, smile coyly, and are all devastatingly irresistible.