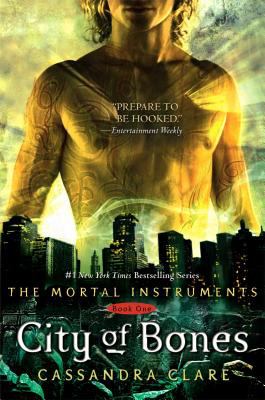 Summary: Suddenly able to see demons and the Shadowhunters who are dedicated to returning them to their own dimension, fifteen-year-old Clary Fray is drawn into a bizzare world when her mother disappears and Clary herself is almost killed by a monster.
List(s) this item appears in: TV and Movies
Tags from this library: No tags from this library for this title. Log in to add tags.
Fiction notes: Click to open in new window

Discover this first installment of the internationally bestselling Mortal Instruments series and "prepare to be hooked" ( Entertainment Weekly ).

When fifteen-year-old Clary Fray heads out to the Pandemonium Club in New York City, she hardly expects to witness a murder--much less a murder committed by three teenagers covered with strange tattoos and brandishing bizarre weapons. Then the body disappears into thin air. It's hard to call the police when the murderers are invisible to everyone else and when there is nothing--not even a smear of blood--to show that a boy has died. Or was he a boy?

This is Clary's first meeting with the Shadowhunters, warriors dedicated to ridding the earth of demons. It's also her first encounter with Jace, a Shadowhunter who looks a little like an angel and acts a lot like a jerk. Within twenty-four hours Clary is pulled into Jace's world with a vengeance, when her mother disappears and Clary herself is attacked by a demon. But why would demons be interested in ordinary mundanes like Clary and her mother? And how did Clary suddenly get the Sight? The Shadowhunters would like to know...

Exotic and gritty, exhilarating and utterly gripping, Cassandra Clare's ferociously entertaining fantasy takes readers on a wild ride that they will never want to end.

Suddenly able to see demons and the Shadowhunters who are dedicated to returning them to their own dimension, fifteen-year-old Clary Fray is drawn into a bizzare world when her mother disappears and Clary herself is almost killed by a monster.

Clare's debut novel, first in the Mortal Instruments series, is a sprawling urban fantasy packed with just about every type of creature known to the genre, and still spacious enough to hold more. Fifteen-year-old Clary Fray witnesses a killing in an "all-ages club"; when she confronts the attackers, she learns that they are spectral Shadowhunters, charged with killing demonic creatures called Night Children. Clary returns home to find her apartment vandalized and her mother missing, apparently kidnapped by creatures in the service of someone named Valentine. An attack by a slithering beast sends Clary to the infirmary at the Institute, hidden home of the Shadowhunters. There she befriends the hunter Jace, who tells her of Valentine's intention to find the Mortal Cup, one of three Mortal Instruments the Angel gave to the first Shadowhunters (the others are a mirror and sword). Great secrets abound both in Clary's past and in her own head--secrets that are gradually revealed to her about her mother, her mother's eccentric friend Luke, her relationship with Jace and, eventually, about Valentine himself. Clare's atmospheric setting is spot-on, informed equally by neo-gothic horror films and the modern fantasy leanings of Neil Gaiman. Werewolves, vampires, angels and fairies all fit in this ambitious milieu. At the core, though, this is a compelling story about family secrets and coming-of-age identity crises. Fans of the smart/chic horror typified by Buffy the Vampire Slayer will instantly fall for this new series. Ages 14-up. (Apr.) (c) Copyright PWxyz, LLC. All rights reserved

Gr 8 Up-Vampires, werewolves, and creatures of every eerie stripe are lurking all over New York, as Cassandra Clare's City of Bones (S & S/Margaret McElderry Books, 2007) begins "The Mortal Instruments" trilogy. Clary Fray, 15, knows something's strange when she sees a punk rocker demon destroyed by Jace, Alec, and Isabelle. What's more, her friend Simon can't see any of the rune tattooed trio. It turns out that the three powerful teens are Shadowhunters, a race of warriors. Clary's mother has hidden her own connection to these magical marauders, but the teen's blocked memory is gradually returning. When her mother disappears and Clary is attacked by a monstrous insect predator, the girl is rescued by Jace and they retreat to safety at The Institute. Drawn into the quest for the Mortal Cup, Clary gets embroiled in numerous bloody encounters and betrayals as she uncovers the truth about her father, her family, and the forces stalking her. A romantic attachment to Jace and questions about her relationship with Simon add to her turmoil. Though a family friend in an unexpected guise helps her save her mother, the cliffhanging conclusion leaves plenty of room for new conflicts. Narrator Ari Graymor is suitably ironic and dramatic as the text demands. With a female protagonist and horror movie levels of gore, the novel will appeal to guys and girls who like their fantasy sometimes fast paced and often gruesome. A good choice for extensive fantasy collections, but an additional purchase for smaller public and high school libraries.-Barbara Wysocki, Cora J. Belden Library, Rocky Hill, CT (c) Copyright 2010. Library Journals LLC, a wholly owned subsidiary of Media Source, Inc. No redistribution permitted.

Fifteen-year-old Clary Fray's ordinary life turns upside down when she begins seeing demons, her mother is kidnapped, and Clary is taken in by Shadowhunters, demon-fighters as astonished by her newfound abilities as she is. Despite recycled material and purple prose, the snappy dialogue and striking details in this hip, sprawling urban fantasy keep the convoluted series opener entertaining. (c) Copyright 2010. The Horn Book, Inc., a wholly owned subsidiary of Media Source, Inc. No redistribution permitted. All rights reserved.

This urban-fantasy series opener spices its fight against evil with sexual tension. Fifteen-year-old geek hipster Clary thought she was just a normal kid, but normal kids don't see invisible people, and normal kids' mothers don't suddenly disappear, seemingly captured by horrific monsters. But like many fantasy heroines, Clary isn't normal, and she's got all the secret parentage, dramatic revelations and amazing magic powers to prove it. Clary is a Shadowhunter, brought up as a mundane but born to fight demons. She and her mundane friend Simon fall in with a trio of Shadowhunter teens, and are soon embroiled in a quest to understand Clary's past--and incidentally save the world. Rich descriptions occasionally devolve into purple prose, but the story's sensual flavor comes from the wealth of detail: demons with facial piercings, diners serving locusts and honey, pretty gay warlocks and cameo appearances from other urban fantasies' characters. Complicated romantic triangles keep the excitement high even when the dramatic revelations tend toward the ridiculous. Lush and fun. (Fantasy. YA) Copyright ©Kirkus Reviews, used with permission.
More book reviews at iDreamBooks.com