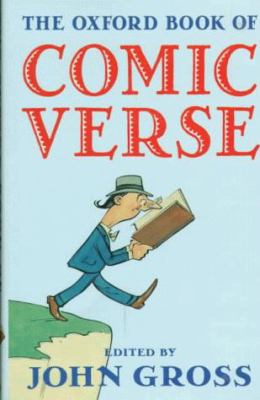 The Oxford book of comic verse / edited by John Gross.

"Comic verse," writes editor John Gross, "is verse that is designed to amuse--and perhaps that is as far as any attempt at a definition ought to go." In The Oxford Book of Comic Verse, Gross has combed the annals of literature in English from the middle ages to the present, gathering poems that provoke laughter, smiles, and even reflections on the human condition--but always poems that amuse.
From limericks to social satire, The Oxford Book of Comic Verse offers a remarkable collection of outstanding light poetry. Gross has brought together the finest writers in the history of the English language--from Chaucer and Skelton to Shakespeare and Swift, Lord Byron to Robert Browning, Emily Dickinson to John Updike--offering delightful examples of their comic verse. Many of these lines dance with whimsy, such as John Skelton's Colin Clout ("For though my rhyme be ragged,/ Tattered and jagged,/ Rudely rain-beaten,/ Rusty and moth-eaten,/ If ye take well therewith,/ It hath in it some pith"); others float heavier thoughts on light rhymes--as in Matthew Prior's succinct Human Life ("What trifling coil do we poor mortals keep;/ Wake, eat, and drink, evacuate and sleep."). The range of writers who have composed comic verse is astonishing, as is the delight of the poems themselves. Here we read T.S. Eliot mocking himself ("How unpleasant to meet Mr. Eliot!/ With his features of clerical cut"); poet and Soviet historian Robert Conquest, mingling his two professions in a limerick ("There was a great Marxist called Lenin/ Who did two or three million men in/ --That's a lot to have done in/ --But where he did one in/ That grand Marxist Stalin did ten in"); and Wendy Cope commenting on her disillusionment with poets ("I used to think all poets were Byronic./ They're mostly wicked as ginless tonic/ And wild as pension plans"). And along the way, we are treated to witty song lyrics as well, from First World War soldiers' tunes, to Irving Berlin, to Cole Porter, to Lorenz Hart ("When love congeals/It soon reveals/ the faint aroma of performing seals/The double-crossing of a pair of heels/I wish I were in love again!").
Whether it comes from anonymous popular culture or the icons of the literary canon, comic verse has been a source of pleasure and diversion through the ages--a combination of wit, verbal artistry, and even serious contemplation. This collection, compiled by one of our finest critics and anthologists, brings this tradition into the hands of today's readers, offering hours of delight.

In his introduction, Gross, also the editor of The Oxford Book of Essays, defines comic verse as primarily meant to amuse. From this bland definition he derives his principles of inclusion: funny poems that do not exceed the boundaries of good taste. No bawdy lyrics, no skewering satire here. Within these limits, he surveys the field from Chaucer to Glyn Maxwell (1962-), comforting readers with such old chestnuts as Tom Brown's ``Dr. Fell,'' the anonymous ``Elinor Glyn'' and Gellett Burgess's ``The Purple Cow,'' and delighting them with new suprises like Burgess's sequel, ``Cinq Ans Apres,'' Richard Wilbur's ``Prisoner of Zenda,'' C.S. Calverley's ``Flight,'' Virginia Graham's ``Ein Complaint'' and a host of others. Arguments could be made over the relative lack of American and, especially, female voices-where, for example, are Gertrude Stein, Edna St. Vincent Millay, Marianne Moore?-and over the inclusion of popular song lyrics, poems in French, or Burma shave ads. But this is, overall, an entertaining collection that updates and complements W.H. Auden's Oxford Book of Light Verse (1939, reprinted 1979) without in the least challenging Auden's more serious purposes. (Dec.) (c) Copyright PWxyz, LLC. All rights reserved

Even hardened poetry loathers enjoy comic verse now and then. Unfortunately, if said grumblers go only for filthy limericks, they'll hate this book, too; editor Gross acknowledges the appeal of the risibly risque but excludes it. Yet if those verse haters still enjoy nonfilthy limericks or Burma-Shave signs, maybe they'll at least read the examples of both herein and then let their eyes stray and discover plenty to raise a smile and brighten a day. It'll help during the first third of the book, which presents the pleasantries of bards from Chaucer through Tennyson, if they're literarily or historically informed, but thereafter nearly any good reader should find lots to enjoy: patter songs by W. S. Gilbert, parodies of serious poems and parodies of the loopy English language (see "The Harbour of Fowey" by Sir Arthur Quiller-Couch), music hall recitations and Tin Pan Alley lyrics, the inimi~table reflections on mundane madness of Ogden Nash, silly alphabets (including one from Barry Humphries' altered ego, Dame Edna Everage), and much by poets whose reputations are for heavier stuff. ~--Ray Olson
More book reviews at iDreamBooks.com