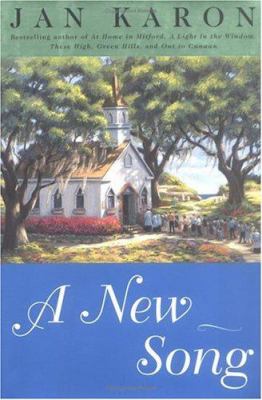 Jan Karon's millions of fans can't wait to sit down with her heartwarming and hilarious characters, who have a way of becoming family. In fact, readers and booksellers across the country kept Out to Canaan and At Home in Mitford on The New York Times bestseller list for months. In A New Song , Mitford's longtime Episcopal priest, Father Tim, retires. However, new challenges and adventures await when he agrees to serve as interim minister of a small church on Whitecap Island. He and his wife, Cynthia, soon find that Whitecap has its own unforgettable characters: a church organist with a mysterious past, a lovelorn bachelor placing personal ads, a mother battling paralyzing depression. They also find that Mitford is never far away when circumstances "back home" keep their phone ringing off the hook. In this fifth novel of the beloved series, fans old and new will discover that a trip to Mitford and Whitecap is twice as good for the soul. "Everything that, in the wee hours of the night, you like a book to be, warm-hearted and funny, with a hero marked by...profound inner strength" -- Milwaukee Journal Sentinel

In this fifth entry in the Mitford series (Out to Canaan, LJ 5/1/97), Father Tim Kavanagh heads for the islands to serve as an interim priest. Although most of the book takes place in his new parish, fans of Mitford's eccentric citizens are not left bereft. Frequent bulletins keep Father Tim up-to-date as well as worried about his former flock. While juggling news of mysterious thefts, the arrest of his adopted son, Dooley, and fights over historic properties, he also must deal with congregational squabbles, being a foster parent to an active three-year-old, surviving a terrible storm, and bringing a lonely man out of decades of solitude. As usual, Father Tim handles it all with the generous faith and soul-healing warmth that has made Karon's books popular in public libraries and best sellers for Christian book stores. [Previewed in Prepub Alert, LJ 12/98.]ÄJan Blodgett, Davidson Coll., NC (c) Copyright 2010. Library Journals LLC, a wholly owned subsidiary of Media Source, Inc. No redistribution permitted.

In this fifth volume of Karon's popular series (Out to Canaan, etc.) set in the quaint North Carolina town of Mitford, where people chuckle and say "dadgummit," Father Timothy Kavanagh is leaving town for a post-retirement interim appointment at a small island parish off the coast of North Carolina. After what seems (even to the minister and his wife) to be an endless round of good-byes, he and his wife, Cynthia, set off in a brand-new red convertible. Stormy weather, which closes in on them as they near Whitecap Island, presages the many struggles to come. Once on the island, Fr. Tim tries to befriend a seemingly hostile and isolated neighbor while he and Cynthia take over the care of a three-year-old boy whose mother is suffering from depression. Back in Mitford, meanwhile, Dooley, the mountain boy who is like a son to Fr. Tim, is thrown into jail, and the quiet woman who seemed the perfect tenant for the rectory house surprises the minister with a lawsuit. Additionally, an unexpected storm moves in off the ocean with devastating force. Karon adds a dash of suspense to her homey brew with the increasingly suspicious behavior of Fr. Tim's tenant, whose story emerges in a compelling confession. Newcomers to the series may find they have much to catch up on, but readers making a return trip to the Kavanaghs' world will be happily swept up in the maelstrom of small-town and spiritual drama that characterizes the novel. Literary Guild and Doubleday Book Club super release; Crossings Book Club main selection; Penguin audio; author tour. (Apr.) (c) Copyright PWxyz, LLC. All rights reserved

There's no rest for the weary, as a character in a Jan Karon novel might say. When we left Father Tim Kavanaugh in Out to Canaan (1997), the last installment in Karon's Mitford series, he was dreading his impending retirement. Six months have gone by, and Father Tim makes a temporary move to the island resort town of Whitecap, where he takes over as interim priest of St. John's in the Grove. Except that it's on the ocean instead of in the mountains, there isn't much difference between Whitecap and Mitford--busy parish life, nice neighbors with a few harmless eccentrics thrown in, a cafewhere folks meet to discuss local news, a child from a troubled family, semi-adopted by Father Tim and his energetic wife, Cynthia. Added to the mix are a bad storm and a reclusive neighbor. Meanwhile, life goes on back home in Mitford. Adopted son Dooley gets into a minor scrape, efforts continue to rebuild Dooley's damaged family, and the tenant at the rectory threatens to cause an upheaval by dredging up the past of one of Mitford's most distinguished residents. Just like Father Tim's tenure in Whitecap, this new book has an interim feel, with plenty of material left for future volumes. Karon's great skill is writing novels that are cozy, comfortable, and folksy but never pious or sentimental. Expect demand from her growing legion of fans. --Mary Ellen Quinn

This fifth installment in Karon's popular Mitford Saga (Out to Canaan, 1997, etc.) follows Father Tim Kavanagh and his wife, Cynthia, as they wander farther afield to Whitecap Island, North Carolina. Now retired from his longtime post as rector of the Episcopal parish of Mitford, Father Tim accepts a position as 'interim minister' at a parish on a small coastal island just off the nearby Outer Banks. Karon is an old-fashioned writer'she even addresses her opening lines to a Gentle Reader'and much of her story revolves around the homely details of cooking, socializing, and keeping house that are familiar to any minister's wife or daughter. But domestic crises arise as well, and Father Tim and Cynthia both have to find ways to help parishioners who suffer from loneliness, depression, and other (usually secret) griefs. Much of their concern is for Dooley Barlowe, a`'mountain boy'' Tim took into his home at Mitford five years before and raised almost as his own son, sending him to a Virginia prep school for education and guidance. Dooley, now in his teens, has stayed behind in Mitford but soon finds himself back in the kind of trouble from which Father Tim and Cynthia have worked hard to extract him. A story of small traumas and small victories, Karon's account manages to avoid the worst excesses of sentimentality and to provide a rather charming portrait of life in the slow lane. (Literary Guild selection; author tour)
More book reviews at iDreamBooks.com