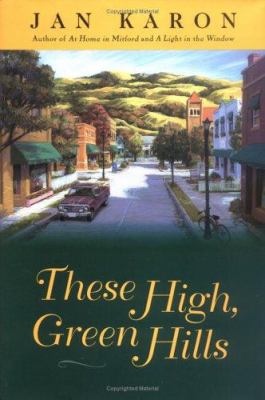 Now in mass market for the first time--the beloved "New York Times" bestselling series, set in the town of Mitford. This third installment finds rector and lifetime bachelor, Father Tim, has finally married his vivacious neighbor, Cynthia. Can the sixtysomething rector learn to live with another person?

Karon has attracted a huge following with her self-published tales of the gentle Southern mountain town of Mitford, and now a big trade house is cashing in on her success. (c) Copyright 2010. Library Journals LLC, a wholly owned subsidiary of Media Source, Inc. No redistribution permitted.

This third in the Mitford series (At Home in Mitforda 1996 ABBY Book of the Year finalistand Light in the Window) is another sympathetic portrayal of small-town Southern life with just enough drama to carry the plot and gracefully developed portraits of endearing characters. Allusions to past events and cameos by peripheral characters will delight the fan but may frustrate the reader new to Karon's work. Mitford is a Southeastern mountain town where everyone turns out for benefactress Sadie Baxter's birthday, where the police chief gives copies of Southern Living to inmatesand where social trouble brews in a hillbilly enclave across the creek. Episcopal minister Timothy Kavanagh of Lord's Chapel is the pivotal character. A lifelong bachelor adjusting to marriage for the first time at 63, he has no perspective on his faith and future until he and his new wife, Cynthia, are lostand foundin a cave on a youth-group camping trip. Most compelling in Timothy's affectionately drawn flock are the young people. Thirteen-year-old Dooley Barlowe was abandoned at the rectory and now struggles to adjust to Timothy's Pygmalion efforts; Lacey Turner, also 13, is saved from her father's abuse as much by Timothy as by social services. Like glass chips tumbling in a kaleidoscope, the people at Mitford fall neatly into place at story's end, having provided a cozy and satisfying read. Author tour. (Aug.) (c) Copyright PWxyz, LLC. All rights reserved

Some readers may already be familiar with Father Tim Kavanaugh, sixtyish rector of Lord's Chapel in the tiny southern town of Mitford. In this, the third Mitford novel following At Home in Mitford (1994) and A Light in the Window (1995), Father Tim is newly married to his next-door neighbor, a writer of children's books. The boy Father Tim took under his wing in a previous book is now away at a Virginia prep school, tuition paid by Miss Sadie Baxter, Mitford's oldest resident. Father Tim ministers to his parishioners, adjusts to married life, meets the other regulars at the Grill most mornings for breakfast, tries to master a new computer, and hires a chaplain for the nursing home being built just outside town. But Father Tim's greatest challenges come from the inhabitants of the hardscrabble community called the Creek, where poverty, addiction, and domestic violence are not uncommon. Gentle without being sentimental, imbued with religious faith without being preachy, this novel is one of small moments, but as Father Tim learns from his wife, some of life's greatest rewards come from the smallest pleasures. --Mary Ellen Quinn

The literary equivalent of comfort food in a tale of middle- aged love in Mitford, a fictional North Carolina small town: a novel that restores rather than provokes as it deftly portrays men and women caught up in the human condition. Like its popular predecessors (At Home in Mitford and A Light in the Window, not reviewed), the author's latest celebrates the lives of several Mitford citizens while offering vignettes of many more. As the story opens, 60ish Episcopalian Rector Father Tim Kavanagh has just returned from his honeymoon. A longtime bachelor, he is touchingly surprised by the joy marriage to neighbor Cynthia has brought him. Cynthia, a children's book author and illustrator, is not, however, a traditional clergyman's wife--a shocking bit of news for Tim's secretary Emma and the Episcopal Church Women. Thanks, though, to a splendid parish tea party--a tea for which Cynthia redecorates the rectory and provides delicious food--the ladies are mollified. In the year that passes, the holidays (both religious and secular) are celebrated; the community reaffirms its identity; and the deaths of the town's oldest inhabitant and of a child are balanced by the birth of twins to Tim's young housekeeper. Meanwhile, though the setting is pastoral and the people good-hearted, Mitford is as subject to change and horror as the outside world. Misogynist J.C., the editor of the local paper, amazes the townsfolk by marrying Mitford's first woman police officer; Lacey, a young girl, though badly beaten by her father, refuses to leave home because she must care for her bedridden mother; Pauline Barlowe is set on fire by the man she lives with; and Tim's faith is sorely tested and then reaffirmed. Such a small canvas framed by faith could easily be smug and anodyne, but it's not: Karon is one of those rare writers who can depict the good and the ordinary without being boring or condescending. A book to curl up with. (Author tour)
More book reviews at iDreamBooks.com