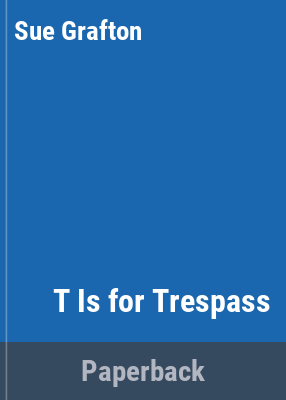 T is for trespass / Sue Grafton.

When her elderly neighbour Gus has an accident, Kinsey Millhone is relieved when his niece organises a nurse for him. Verifying a background check on Solana Rojas doesn't turn up anything suspicious. But Kinsey's not convinced - especially when Gus seems to be getting worse under his nurse's tender care.

Grafton tackles identity theft and elder abuse in her 20th Kinsey Millhone mystery (after S Is for Silence). Gus Vronsky, Kinsey's elderly next-door neighbor, suffers a fall and needs in-home care. A health-care nurse named Solana Rojas is hired, and Kinsey even does the background check, finding nothing out of order. As Gus's condition deteriorates and Solana limits access to her patient, Kinsey and her landlord, Henry, suspect that something is a little off with Solana-and "little off" doesn't fully describe this identity thief and true sociopath. Digging around more carefully, Kinsey unearths horrifying details of Solana's past and must act quickly to save Gus. This is vintage Grafton, set in the 1980s but scarily current, carefully plotted, and fast paced. Kinsey even flirts with healthful eating (vegetables are consumed), but the reader soon sighs with relief when Kinsey returns to her old habits, frequenting the drive-thru at McDonald's and enjoying pal Rosie's hearty Hungarian fare. Recommended for all public libraries. [See Prepub Alert, LJ 8/07.]-Andrea Y. Griffith, Loma Linda Univ. Libs., CA (c) Copyright 2010. Library Journals LLC, a wholly owned subsidiary of Media Source, Inc. No redistribution permitted.

Tony award-winner Judy Kaye has been the voice of private eye Kinsey Millhone since the beginning, and 19 titles later, she's still an inspired choice, capturing the character's unique combination of femininity and ruggedness, intelligence, street savvy and self-confidence with just a hint of uncertainty. Trespass is possibly a series best. Both reader and sleuth are working at full tilt as Kinsey interacts with a large cast. Her foremost opponent is the devious and homicidal black widow who has spun a web around the detective's aged and infirmed next door neighbor. Grafton deviates from Kinsey's narration to delve into the killer's history and mind-set, underlining the seriousness of her threat. Kaye offers a crisp, chillingly cold aural portrait of a sociopath capable of anything. Kaye's spot-on interpretation of the two very different leading characters would be praiseworthy enough, but she's just as effective in capturing the elderly men and women, the screechy landladies, the drawling rednecks, the velvet-tongued smooth operators, the fast talking lawyers and all the inhabitants of Kinsey's world. Simultaneous release with the Putnam hardcover (Reviews, Sept. 17). (Dec.) (c) Copyright PWxyz, LLC. All rights reserved

Grafton focuses on the soul-wrenching trespasses of elder abuse and identity theft in her latest Kinsey Millhone mystery. Private eye Millhone has an elderly, nasty neighbor who falls victim to a sociopath. The narrative shuttles between Millhone's first-person narration and the point of view of the sociopath, a woman who has stolen a nurse's identity, has committed murder, and finds caring for the elderly a profitable way to clean up fast. This double-narrative device works especially well here: we're both entertained by Millhone's hard-earned cynicism and horrified by the sociopath's calm assessment of what people are vulnerable and how she can play them. Grafton turns in an unnerving account of the forms that elder abuse currently takes, from home care through institutional neglect. She also is utterly knowledgeable about identity theft. The book drags quite a bit, though, since it's obvious from the start that Millhone will uncover the nurse's wrongdoings.The writing also suffers from the unnecessary insertion of details about Millhone jogging, doing errands, and slogging through routine paperwork. As Grafton makes her way through the alphabet, not only is she using every letter, but, in this book at least, she seems to use every letter thousands of unnecessary times.--Fletcher, Connie Copyright 2007 Booklist

Kinsey Millhone's 20th case, which pits her against a creepy pair of abusers who don't know of each other's existence, is one of her finest. In between big jobs (S Is for Silence, 2005, etc.), Kinsey works as a process server and does spadework on insurance claims. Now (in the winter of 1987-88) she's staying busy serving papers on a dad who owes child support and gathering evidence to show who was at fault in a low-speed traffic accident that left Gladys Fredrickson seriously injured. Kinsey doesn't know that a more important case is unfolding much closer to home. Her irascible old next-door neighbor Gus Vronsky, tottering around his house after a fall sent him to the hospital, has fallen into the clutches of predatory caregiver Solana Rojas. Hired by Gus's self-absorbed great-niece to check out Solana's credentials, Kinsey is initially fooled because Solana, whose backstory Grafton unfolds in a series of chapters from her point of view, isn't really Solana; she's stolen her identity from someone whose record is clean. Settling into Gus's house, Solana begins to pick him clean while Kinsey's distracted by her caseload, which eventually leads her to a child molester quite as frightening in his way as Solana. Each of Kinsey's cases stretches the private-eye formula in new ways. Her 20th, which reads like vintage Ruth Rendell, will bring shivers to every reader with an aged parent--or a young child. Copyright ©Kirkus Reviews, used with permission.
More book reviews at iDreamBooks.com