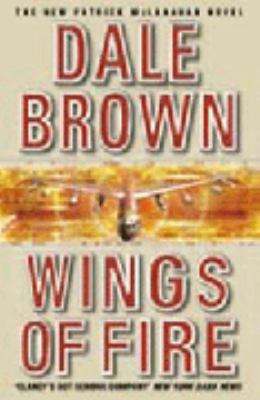 Maverick USAF pilot Patrick McLanahan is caught up in explosive events in the Middle East in this new high-action adventure from the bestselling author of FLIGHT OF THE OLD DOG and WARRIOR CLASS. With the authenticity expected of a former pilot and the storytelling skills that have brought him 13 New York Times bestsellers, Dale Brown has a reputation as the master of the modern military thriller. Now, his 14th novel finds a disgraced Patrick McLanahan facing his greatest challenge. When the new Libyan president has the new Egyptian president assassinated, his widow vows revenge. She takes over the Egyptian government and in the process ensnares McLanahan, who helps her with his military knowledge and high-tech weapons. Then she has the Libyan president assassinated and rapidly adopts the role of leader in the Arab Middle East. But events spiral out of control when she invades the Gaza Strip and both Syria and Israel threaten war with Egypt. Will McLanahan continue to protect this increasingly power-mad tyrant, or will he come to his senses and risk his life by turning against her?

An outcast air force general who has come under the spell of Makta Salaam, vengeful widow of Egypt's assassinated president, finds that he must wrench himself free before Salaam goes too far and sets herself up as queen of Arab North Africa. (c) Copyright 2010. Library Journals LLC, a wholly owned subsidiary of Media Source, Inc. No redistribution permitted.

Military-action thriller-master Brown (Warrior Class) ignites a Middle East powder keg and drops an unsanctioned special ops corps of retired U.S. military officers armed with new superweapons into the mix in his best outing yet. Forcibly retired Air Force Gen. Patrick McClanahan leads the Night Stalkers on secret humanitarian ops. His latest contract, from Big Oil, is to destroy missile sites set up by Libyan president Zuwayy, a Muslim fanatic who deposed Khadafy and wants Egypt's oil fields. Zuwayy kills Egypt's president; the president's widow, former American air force pilot Susan Bailey Salaam, barely escapes. Patrick's team attacks during the uproar and destroys the missiles, but many soldiers are captured, including Patrick's wife, Wendy. Susan, wildly popular in Egypt, decides to run for president and sees the Night Stalkers as her secret weapon against Zuwayy's aggression. Needing a base from which to rescue Wendy, Patrick agrees to help Susan take action when a deadly nerve gas wipes out an Egyptian army post. Meanwhile, the Night Stalkers' weapons lab in Nevada is facing a coup led by the parents of a child science prodigy who takes laser weapons to a new level and gives the Stalkers a deadly edge. Brown's knack for action allows him to set a speedy pace that doesn't let up until the shocker ending. The politics and Middle East setting are spot on; the superweapons are eye-openers; and the villains deliciously evil but the election of a woman, much less an American woman, as president of Egypt and head of the Muslim Brotherhood defies credibility. Still, it's a white-knuckle read from start to finish. (July) (c) Copyright PWxyz, LLC. All rights reserved

Brown is the author of 13 popular aerial techno-thrillers.His latest concerns retired air force general Patrick McLanahan, now head of a company that has produced an experimental aircraft combining state-of-the-art laser technology, high-speed computers, and stealth systems. The plot itself involves the assassination of Egypt's president by Libya's president. The dead president's American-born, non-Muslim widow survives an assassination attempt aimed at her and is understandingly upset about her husband's death. She seizes control of the Egyptian government with McLanahan's help, then seduces and kills the Libyan president. The plot gets increasingly complicated, involving several North African and Mideastern countries as well as the U.S. There's endless talk of missiles, antiaircraft guns, radar, attack helicopters, code words, and top-secret files; abbreviations abound, including LADAR, SAM, AIM, AGM, ETE, JSOW, and COLA, to name just a few. And, of course there are heroes: McLanahan and his Night Stalkers, who save the day--and the world. --George Cohen

Aerial technothriller once again featuring Patrick McLanahan (Warrior Class, 2001, etc.). Now a general in the US Air Force, McLanahan finds himself unwanted everywhichway: the government, the military, and his own family are down on him. This sets him up as fair game for Makta Salaam, beautiful widow of the assassinated president of Egypt. The president of Libya killed her husband, and Makta wants his head and other parts. With McLanahan and his tech-smarts in tow, she beats an assassination attempt against herself and rises to power in Arab North Africa after seducing and killing her husband's murderer. Then she decides the Gaza Strip belongs in her empire and has her troops invade, with Syria and Israel going on red alert. Will this be Brown's 14th consecutive flag-waving, gung-ho charge up the bestseller list? With a wily, romantic female antagonist and US interest in the Gaza Strip at an all-time high? Let's get serious. Copyright ©Kirkus Reviews, used with permission.
More book reviews at iDreamBooks.com