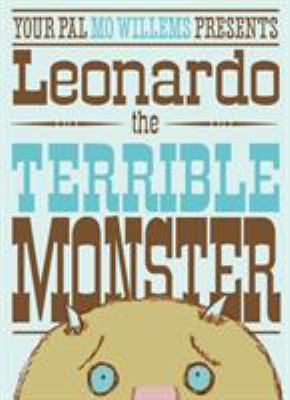 Summary: Leonardo the Terrible Monster doesn't have thousands of teeth, he's small, he's cute and, despite his best efforts, he can't seem to frighten anyone. Then, one day, he meets a nervous boy called Sam and finds out that being a good friend is a whole lot more rewarding than trying to scare the tuna salad out of people!
Tags from this library: No tags from this library for this title. Log in to add tags.
Fiction notes: Click to open in new window

An exceptional tale of an unexceptional monster - laugh-out-loud picture-book fun from the creator of Don't Let the Pigeon Drive the Bus! and the Knuffle Bunny series.Meet Mo Willems' latest character, Leonardo the Terrible Monster. Terrible at being a monster, that is. He doesn't have thousands of teeth, he's small, he's cute and, despite his best efforts, he can't seem to frighten anyone. Then, one day, he meets a nervous boy called Sam and finds out that being a good friend is a whole lot more rewarding than trying to scare the tuna salad out of people!

Leonardo the Terrible Monster doesn't have thousands of teeth, he's small, he's cute and, despite his best efforts, he can't seem to frighten anyone. Then, one day, he meets a nervous boy called Sam and finds out that being a good friend is a whole lot more rewarding than trying to scare the tuna salad out of people!

Picture books commonly suggest that monsters, like certain bullies, are insecure and make marvelous playmates. Pint-size Leonardo, a case in point, is "a terrible monster" because "he couldn't scare anyone." As he roars, two people exchange patronizing smiles, and a circus-style, curly-serif typeface implies silly humor rather than danger. Like a Muppet, Leonardo is knee-high with olive-drab fur, a monkey's tail, a pink nose and tiny white horns. "He didn't have 1,642 teeth, like Tony," a six-mouthed purple guy (a footnote explains, "Not all teeth shown"), and "he wasn't big, like Eleanor," whose clawed feet (one sporting a pearl ankle bracelet) barely fit in the spread. Leonardo decides to pick on someone his own size, but when he successfully startles a moping boy, the child begins to wail about a broken toy in inch-tall italics that fill two pages. Leonardo decides that "instead of being a terrible monster, he would become a wonderful friend," and dispenses a consoling hug. Willems's (Don't Let the Pigeon Drive the Bus!) finale feels apt but syrupy; Leonardo's decision to be nice seems homiletic. Yet this is an appealing book, sketched in dark brown against grayish pastel backdrops, with evergreen lettering and highlighted key words. Leonardo accurately mimics a child's frustration at not being taken seriously; Willems suggests trying kindness to get attention. Ages 3-6. (Sept.) (c) Copyright PWxyz, LLC. All rights reserved

PreS-Gr 1-Leonardo is a terrible monster-"terrible" as in he can't scare anybody. He's not big, doesn't have hundreds of teeth, and isn't even weird. So one day he comes up with an idea: "He would find the most scaredy-cat kid in the whole world-and scare the tuna salad out of him!" After much research, he chooses Sam, sneaks up on him, and "[gives] it all he [has]." When the boy cries, Leonardo is convinced that he is a success. But Sam proceeds to recite a litany of wrongs that actually brought on his tears: "My mean big brother stole my action figure right out of my hands-," and on and on. Leonardo makes a decision that is sure to surprise and delight readers. Willems's familiar cartoon drawings work hand in glove with the brief text to tell this perfectly paced story. It is printed on pastel grounds in large, fancy letters that change color for emphasis. Sam's list of woes marches across a spread. Leonardo, a small greenish-beige creature with tiny horns; blue eyes; and pink nose, hands, and feet, first appears in a lower right-hand corner looking dejected, but when he makes his momentous decision, his circular head fills two pages. His antics to produce a scare will have youngsters laughing, while the asterisk next to the number of monster Tony's teeth ("*note: not all teeth shown") will have grown-ups chuckling, too. A surefire hit.-Marianne Saccardi, Norwalk Community College, CT (c) Copyright 2010. Library Journals LLC, a wholly owned subsidiary of Media Source, Inc. No redistribution permitted.

PreS-K. Your Pal, Mo Willems, as the cover reads, offers a simple message-driven story, elevated by a smart, striking design. Leonardo is supposed to be a terrible monster, but he's just terrible at his monsterly craft. Small, with big blue eyes, a blue tongue, and a furry body, Leonardo looks like a tiny, unassuming brother of a Wild Thing. He gets an idea: find the most scaredy-cat kid in the world and scare the tuna salad out of him. He finds Sam, who seems an easy mark and bursts into tears. But on a clever double-page spread, Willems lists the real reasons Sam is crying, starting with My mean big brother stole the action figure out of my hands and ending with a bird's pooping on Sam's head. After thinking it over, Leonardo decides to move from terrible monster to wonderful friend. This oversize book uses thick paper in the colors of a desert sunset. Sam and Leonardo take up very little room on the large pages; the old-fashioned lettering dominates the expanse of color. A winner for story hours, with plenty of discussion possibilities. --Ilene Cooper Copyright 2005 Booklist

(Preschool) Leonardo the monster can't scare anyone -- and it's true, he's more cute than terrifying. Dejected but not defeated, Leonardo decides to find ""the most scaredy-cat kid in the whole world"" and frighten ""the tuna salad out of him."" Willems's story plays out like a theatrical performance on tall, uncluttered, muted-color pages. The ornamental, circus-poster-like typeface, in all caps, reinforces this idea, and Willems's sense of pacing helps convey mood. Leonardo targets bespectacled Sam, whom we meet cowering in the bottom corner of a gray and wordless double-page spread. The monster act makes Sam cry, but not, Sam says, because he's scared. ""'Oh, yeah?' replied Leonardo. 'Then why are you crying?'"" Sam's two-page tirade (worthy of Willems's pigeon) reveals he's having a very bad day. Leonardo has an epiphany: ""instead of being a terrible monster, he would become a wonderful friend."" In lesser hands, this would be a sentimental and saccharine outcome, but Willems pulls it off with panache. This production is just the ticket for preschool story hour. (c) Copyright 2010. The Horn Book, Inc., a wholly owned subsidiary of Media Source, Inc. No redistribution permitted. All rights reserved.

With a palette straight from the endpapers of Where the Wild Things Are, and postures not a little reminiscent of Max, Willems crafts a sweetly original morality play about a very unscary monster. Realizing that he doesn't possess the ideal monster attributes (1,642 teeth, enormous size or utter weirdness), Leonardo resolves to find "the most scaredy-cat kid in the whole world . . . and scare the tuna salad out of him!" Exhaustive research yields Sam, who, in a double-page-spread torrent of words, explains why he's so miserable he cries when Leonardo tries to scare him: "MY MEAN BIG BROTHER STOLE MY ACTION FIGURE [etc.]!" The instant connection between the two is the very definition of sympathy, and Leonardo and Sam proceed to become fast friends. The highly predictable ending is made fresh by the superb control of pacing, just-zany-enough sense of humor and body language readers have come to expect from the creator of Pigeon and Knufflebunny. Leonardo and Sam appear mostly in the corners of vast blank spreads, the showbiz typeface (all caps) emphasizing the theatricality of it all. Bravo! (Picture book. 3-6) Copyright ©Kirkus Reviews, used with permission.
More book reviews at iDreamBooks.com