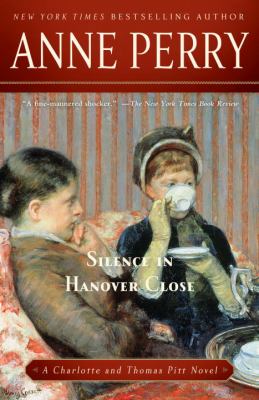 When Inspector Thomas Pitt is asked to reopen a three-year-old murder case that had taken place in London's luxurious Hanover Close, he is all too aware that his superiors want him to simply smooth things over. But penetrating the reserve of high society households will take more finesse than Pitt can muster. Enter Charlotte Pitt, his wellborn wife, and her sister, Emily. As the social equals of the inhabitants of the Close, the women are privy to conversations that would never reach the ears of a mere policeman. What they find is a secret so shocking it will lead to more deaths--including, quite possibly, Pitt's own.

Inspector Thomas Pitt, Anne Perry's gentle and astute hero of eight other Victorian mysteries, assumes a secondary role in this complex, gripping and highly satisfying mystery. High officials in the Foreign Office wish to reopen the unsolved murder case of one of their diplomats, Robert York, and Pitt is reluctantly chosen by Supt. Ballarat, his arrogant and ambitious superior, to head the investigation. Ballarat is fearful of offending powerful friends, so he cautions Pitt to be thoroughly discreet, thus rendering him ineffectual. Charlotte, Pitt's able wife, decides to aid him by exploring the upper levels of society that are closed to a police inspector. Skillfully assuming the role of a country girl with breeding and money, she befriends key figures in the York murder: Veronica, the stunning yet fragile widow, and Loretta, York's steely and self-contained mother. Emily, Charlotte's titled and wealthy sister, carries the investigation a step further by hiring on as Veronica's ladies' maid, where, her real identity unknown, she is able to eavesdrop on both upstairs and downstairs gossip. The mystery is an adroit blend of thick London atmosphere and a convincing cast, mingled with the complex and straitlaced conventions of Victorian England. A bonus is a totally surprising yet wonderfully plausible finale. (August) (c) Copyright PWxyz, LLC. All rights reserved

Another of the author's Victorian mysteries (Rutland Place, etc.) featuring poor but mensch-y policeman Thomas Pitt and his highborn wife Charlotte--whose ability to encroach on her husband's turf strains credibility more than ever in this heavily padded, tortoise-paced story involving the three-year-old unsolved murder of young diplomat Robert York. Pitt is ordered by arrogant, ambitious Superintendent Ballarat to reopen the case, for hush-hush reasons possibly having to do with the imminent marriage of York's widow, Veronica, to diplomat Julian Danver, whose father Garrard is also in the foreign service. Meeting a series of dead ends as he goes over old ground, Pitt allows Charlotte to take on the role of country cousin to Jack Radley, her sister Emily's suitor. Jack has social entrÉe to the York and Danver families. In her visits to them, Charlotte senses the enmity and tension between Robert's patrician mother, Loretta, and daughter-in-law Veronica. There are strange undercurrents in the Danver house, too. Meanwhile, Pitt hears stories of a beautiful woman, always dressed in cerise, seen in the dead of night at both houses--but not since the murder. Then the ""accidental"" death of one of his informants prods him to follow a harsh, tedious trail, with dire results. It takes all of Charlotte's nerve and ingenuity to rescue her husband and to uncover what really happened three years before, in a denouement that's bizarre, surprising, and believable--too bad, then, that the passage to it is so repetitive, cluttered, and lengthy. Copyright ©Kirkus Reviews, used with permission.
More book reviews at iDreamBooks.com