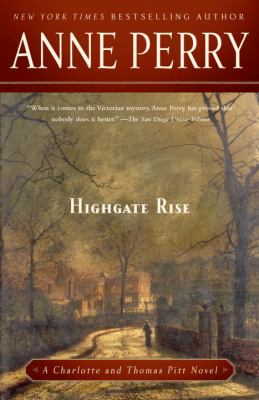 Genre/Form: Historical fiction. | Detective and mystery fiction.DDC classification: Summary: In the Victorian London stunned by the sensational crimes of a madman named Jack the Ripper, a tragic fire in the peaceful suburb of Highgate goes unmarked and an innocent woman has died in it.
Tags from this library: No tags from this library for this title. Log in to add tags.
Fiction notes: Click to open in new window

Clemency Shaw, the wife of a prominent doctor, has died in a tragic fire in the peaceful suburb of Highgate. But the blaze was set by an arsonist, and it is unclear whether she or Dr. Shaw was the intended victim--or did the doctor himself set the blaze in order to inherit his wife's large fortune? Baffled by the scarcity of clues in this terrible crime, Inspector Thomas Pitt turns to the people who had been closest to the couple--Clemency's stuffy but distinguished relatives. Meanwhile, Pitt's wellborn wife, Charlotte, retraces the dangerous path that Clemency walked in the last months of her life, finding herself enmeshed in a sinister web that stretches from the lowest slums to the loftiest centers of power.

In the Victorian London stunned by the sensational crimes of a madman named Jack the Ripper, a tragic fire in the peaceful suburb of Highgate goes unmarked and an innocent woman has died in it.

Clemency Shaw, wife of a prominent London physician, dies as a result of arson. Was she the intended victim or was it her husband? Inspector Thomas Pitt's investigation becomes more complicated when Dr. Shaw's best friend is killed in the same manner. This 1991 mystery, the 11th in Perry's Charlotte and Thomas Pitt series, allows Thomas's feisty wife to take over most of the investigation. As Charlotte looks into Clemency's work to improve the living conditions of slum dwellers, she uncovers a shocking family secret and becomes conflicted about the charismatic Dr. Shaw. Highgate Rise has longer scenes and less action than most titles in the series, and Thomas is missed during his long absences. Yet the characters are as compelling as always, as are the author's Victorian details. Of the many readers of Perry's period fiction, Davina Porter remains the best, handling both domestic and suspense scenes equally well. Recommended for collections where Perry's works are popular.-Michael Adams, CUNY Graduate Ctr. (c) Copyright 2010. Library Journals LLC, a wholly owned subsidiary of Media Source, Inc. No redistribution permitted.

Having temporarily abandoned Victorian police inspector Thomas Pitt and his highborn wife, Charlotte, in her last, highly acclaimed novel, The Face of a Stranger , Perry features the duo once again. She exhibits her customary skill in recreating 19th-century London, but here her well-drawn contrasts of upstairs and downstairs Victorian society have added psychological acuity. And her focus on a social issue--the secret ownership by members of high society of appalling slum housing--lends depth to the mystery surrounding the death of Clemency Shaw, a courageous woman who devoted her life-- and may have lost it--to exposing those who built their fortunes on the misery of the poor. Highgate is a posh Victorian neighborhood that becomes the scene of some highly dramatic house fires that consume people dear to Dr. Shaw, Clemency's husband, a free-speaking liberal who is Perry's most dynamic character to date. Just who is the target of these infernos? Thomas and Charlotte seek answers, while Charlotte in particular finds that Clemency's legacy of compassion did not die with her. Rounded out by a host of lively characters, this is a memorable tale. (May) (c) Copyright PWxyz, LLC. All rights reserved

YA-- London in the 1890s is the setting for this page-turner. Inspector Thomas Pitt has been called in to help solve a murder in a fashionable suburb of the city. Clemency Shaw, the wife of a prominent physician, has been killed in a fire deliberately started in her house, but it's unclear whether she was the intended victim. As the inspector searches for clues, facts unravel and lead readers to the East End and an investigation of slum landlords. Through such characters as Clemency Shaw and Inspector Pitt's wife, Charlotte, Perry reveals the role of women in Victorian society--a time of boredom for middle- and upper-class women and extreme hardship for the working class. A gripping mystery as well as a look into the London of gas lights and foggy nights. --Roberta Lisker, W. T. Woodson High School, Fairfax, VA- (c) Copyright 2010. Library Journals LLC, a wholly owned subsidiary of Media Source, Inc. No redistribution permitted.

Perry gets the Victorian mood just right in her series featuring Inspector Thomas Pitt and his wife, Charlotte, a woman who has married a bit beneath herself. In this episode, tenth in the series, Pitt is on an arson case, one in which Clemency Shaw, the wife of a prominent physician, has died. Arson? Of course, but who was the intended victim? At first it seems like the good doctor, but after some sleuthing, Charlotte learns that Clemency's involvement in cleaning up the slums angered some powerful people. Although the leisurely pace sometimes annoys, there's enough mystery and upstairs-downstairs ambience here to keep readers going. Settle in with this one on a rainy day. ~--Ilene Cooper

Another of the author's forays into Victorian London's manners and mores (Cardington Crescent, etc.), once again featuring highborn Charlotte Pitt and her stalwart police-inspector husband Thomas. There have been two terrible fires in the prosperous Highgate area--both of them arson. Clemency Shaw died in the first one--her doctor husband Stephen was out on a call; the second took the life of neighbor and friend Amos Lindsay, in whose house Dr. Shaw was staying after the destruction of his home when, again, the doctor was away on call. Pitt is certain Shaw was the intended victim both times, but when Charlotte hears (from Great-aunt Vespasia) of Clemency's little-known efforts at unmasking slum landlords in high places, other possibilities surface. Charlotte follows Clemency's footsteps through the worst of London's neighborhoods--only to be rewarded finally with startling results that seem, even with other factors, insufficient motivation for the unconvincing, melodramatic denouement that follows. Heavily padded, repetitive narrative and sluggish pacing don't help. Only the author's finely detailed evocation of the high life--as well as the low--of another era might make this one worthwhile. Copyright ©Kirkus Reviews, used with permission.
More book reviews at iDreamBooks.com