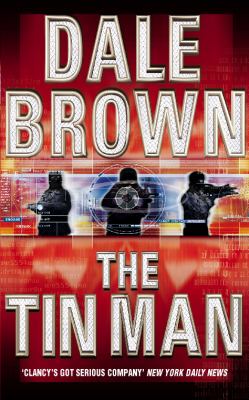 Patrick McLanahan and his team embark on a high-tech battle against crime in the USA - in the spectacular new thriller from the New York Times bestselling author of Flight of the Old Dog and Fatal Terrain. The master of military adventure creates the ultimate one-man army... In another action-packed thriller of unrivalled authenticity, former pilot Dale Brown brings back his ever-popular hero Patrick McLanahan - this time at the centre of an undeclared war exploding on the streets of America. Now retired, McLanahan works for a company developing cutting-edge strategic devices for the armed forces. But when his rookie-cop brother is shot by terrorists, he transforms himself into a high-tech weapon of war. Protected by a new carbon-filament bodysuit that can instantly harden into stronger-than-steel armour and armed with almost-superhuman powers he can barely control, he embarks on a personal mission of revenge that will send his life spiralling towards disaster.

The tag line "This time it's personal" comes to mind in Brown's 11th techno-thriller (after Fatal Terrain). Instead of foreign countries and the threat of WWIII, international terrorism hits the streets of Sacramento, Calif., in the form of Gregory Townsend, who is apparently out to unite California's motorcycle gangs and corner the amphetamine market. His one mistake is wounding the brother of Brown's series hero, veteran Patrick McLanahan, during the robbery of a mall. The resulting mayhem is a tribute to Brown's storytelling abilities; it's an unlikely but successful mix of a revenge plot, a meditation on vigilante justice and a superhero-origin story. McLanahan becomes a one-man army, known as the Tin Man, with the help of some cutting-edge technology from his current employer, a defense contractor. It turns out that Townsend's ultimate aims are not quite what they appear to be; Brown's intentions are just as slippery. While the dark side of vigilante justice has haunted pulp fiction heroes like the Avenger and comic book heroes from Batman to the Punisher, it's a rarity in thriller fiction, which usually likes to keep things black and white and far from home. Brown does the opposite in this novelhe gives this modern Batman a hard-edged twist and a dose of techno-reality, and through a neat plot twist shows how the power to survive and to commit violence is both painful and seductive. Bottom line, it's a page-turning start to a fresh new direction for both Brown and McLanahan. And now that the Tin Man is part of Brown's universe, it will be interesting to see what Brown makes of him. Major ad/promo; simultaneous BBD Audio. (May) (c) Copyright PWxyz, LLC. All rights reserved

Last spotted bailing out of a B-52 over China (in Fatal Terrain [BKL Je 1 & 15 97]), Patrick McLanahan finds himself resting from his aerial exertions. He is in Sacramento learning about birthing procedures with his pregnant wife and mentoring younger brother, Paul, who is joining the city police department. Fans worried that McLanahan has been domesticated may allay their fears because their hero maintains his contacts with the military and with a techno-tyro who has invented the star of this show, a Superman fabric no bullet can penetrate. The cause for suiting up in BERP (ballistic electro-reactive process)? McLanahan's nefarious antagonist, one Gregory Townsend, and his coterie of Hitler-saluting goons. At first, Townsend's agenda seems merely criminal: his team shoots up and robs an entertainment complex, then ostensibly takes over the methamphetamine traffic from a biker gang--but discards that conquest by blowing up the meth labs. Whatever Townsend's game, it's costing hundreds of lives and has city officials going ape. As is common in these Rambo-style yarns, McLanahan must fight officialdom as well as the enemy, where BERP makes all the difference: he is able to land on spinning helicopter blades, emerge unsinged from fireballs, and survive falls down spillways in the pursuit of Townsend. The latter's ultimate objective turns out to be thievery rather than some pseudopolitical terrorist plan of his "Aryan Brigade." Yet the thing he wants to steal, a well-known air force weapon, will strike Brown's fans as a prize worthy of the high-caliber firepower that, invariably in this genre, dwarfs the characters. A popular example of the techno-thriller form. --Gilbert Taylor

Once more featuring retired USAF Colonel Patrick McLanahan, last seen helping independence-seeking Taiwan turn the tide of battle against the Peoples Republic of China (Fatal Terrain, 1997), bestseller Brown's first rocket-fueled Bantam title should lift off nicely, especially now that McLanahan--civilian director of a high-tech company making cutting-edge advancements in strategic devices for the armed forces--has become a superhumanly powerful vigilante called ""The Tin Man."" He uses his miraculous new devices to save his brother, a rookie cop in Sacramento, who has been wounded in a bank-robbery shootout masterminded by the Aryan Brigade. Although Brown's electro-reactive collinear prose style hangs on the most effective distribution of parallel ideas per paragraph, the racing methamphetamine lift of his futuristic hardware plot remains, well, really cool. Copyright ©Kirkus Reviews, used with permission.
More book reviews at iDreamBooks.com