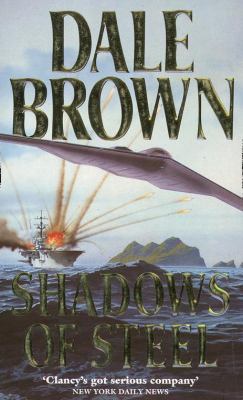 The new novel of breathtaking action and adventure in the skies from the bestselling author of Storming Heaven and Flight of the Old Dog. The spectacular flying scenes, technological detail and astonishing authenticity of international bestsellers such as Flight of the Old Dog, Chains of Command and Storming Heaven have won ex-pilot Dale Brown a place at the leading edge of modern military thriller writing. Now, in his first novel for two years, he brings back one of his most popular characters, Patrick McLanahan, at the controls of his state-of-the-art B-2 stealth bomber - in a heart-stopping tale of contemporary conflict. With Iran throwing its weight around the Persian Gulf, his latest mission, as part of a top secret CIA flying unit, is to find Iran's key military, industrial and command centres, and destroy them: quickly, secretly, untraceably - the ultimate stealth attack.

One of the special pleasures of constructing a techno-thriller seems to be the opportunity to predict one's own version of world affairs. In an unusually thoughtful entry set in early 1997, shortly after the events of his novel Day of the Cheetah (1989), Brown (Storming Heaven) takes time to explore such issues as the thin line separating special operations from terrorism and the role of the warrior in a supposedly peaceful world. The Iranians are at it again, attacking a U.S. spy ship. When American personnel are taken captive, President Kevin Martindale (a Brown regular) realizes he must act. As is usually the case with this genre (and perhaps real-life politics), the president and his military advisors decide to rely upon high-tech aircraft and weaponry to destroy the enemy's war-making capabilities, some of which, in this case, have come by way of China. A B-52 stealth bomber flown by returning Brown hero Patrick McClanahan is the center of the action that whirls from prison cells through a coup d'état, climaxing in air encounters of the radar kind. Brown is a master of this school of fiction, bringing life to his characters with a few deft strokes. More than just a military thriller, this novel offers disturbing descriptions of possible political developments that are worthy of discussion. (June) FYI: In an author's note, Brown says he will welcome e-mail with comments on the novel, at OldDog01@aol.com. (c) Copyright PWxyz, LLC. All rights reserved

The high-flying Captain Brown returns in his ninth technothriller, which once again features Patrick McLanahan. This time, McLanahan and his cronies are working to rescue a U.S. spy ship crew from some particularly thuggish Iranians and also keeping an Iranian aircraft carrier (acquired from the former-Soviet-armaments yard sale, so to speak) from catastrophically destabilizing the Persian Gulf region. They have available to them the resources of the CIA, a B-2 bomber (clearly one of Brown's favorite birds), and some lengthily described and ingenious weaponry--for instance, cluster bombs that dispense an acid sludge that dissolves key components of enemy aircraft. The action is fast (despite a slight surplus of subplots); characterization is subordinate to the many excellent flying scenes; and altogether, the yarn is more of what Brown has done before and most likely will continue doing, to his profit and the satisfaction of technothriller fans. --Roland Green

Gulf War II, albeit without the Coalition and with latter-day Persia as the foe, in this red-meat technothriller from old pro Brown (Storming Heaven, 1994, etc.). Three years short of a new millennium, Iran is rattling space- age sabers in an effort to gain dominion over the Strait of Hormuz, a choke point in the world's oil-supply line. At odds both with Arab neighbors allied to the US and with the Great Satan itself, the Islamic republic is armed, dangerous, and under the military command of a rash ultranationalist: General Hesarak al-Kan Buzhazi. Hostilities begin when Iran sinks an American spy vessel. In assessing response options, the new US president is all too aware that budget cuts and ill-advised peacekeeping missions have greatly weakened America's armed forces. Accordingly, the Chief Executive calls in the Intelligence Support Agency, a supersecret arm of the CIA. With a blank check from the White House, ISA quickly goes operational with a B-2A Stealth bomber. Under the expert guidance of Patrick McLanahan (an ex-USAF weapons officer), the all but undetectable aircraft and its on-board array of ordnance and electronic countermeasures raise merry (if deniable) hell with the Mideastern theocracy's defenses. Although down, Iran (which has concluded a mutual-assistance pact with Red China) is not out, and Buzhazi's air arm nearly figures out a way to shoot the lone shadow of steel from the sky. The B-2A's can-do crew rises to the occasion, however, and Tehran's officer corps pays a stiff price for its extremism. While the Yanks believe themselves clear victors at the close, there's reason to believe they may have to take on the PRC and its nukes in the next round. State-of-the-art action in the air, on land, and at sea from a master of the future-shock game.
More book reviews at iDreamBooks.com