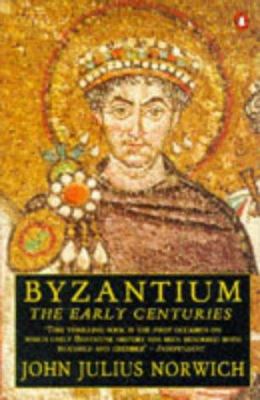 'This thrilling book is the first occasion on which early Byzantine history has been rendered both readable and credible' - Independent.
'He is brilliant . . . He writes like the most cultivated modern diplomat attached by a freak of time to the Byzantine court, with intimate knowledge, tactful judgement and a consciousness of the surviving monuments' - Independent.
'Lord Norwich's skill is to communicate . . . the humanity of his subject - the human faces of emperor and priest - and to transmit his own imaginative interest to ourselves . . . Lord Norwich has appeared as a silver-tongued Virgil to guide us through Tartarian regions with the amenity and amusement of a luxury tour' - Sunday Times.
'The reader is conveyed in comfort, as it were in a very superior hovercraft, which glides smoothly over all the unevenness of the ground, to the regular, melodious sound of the author's prose' - Sunday Telegraph.

Several works dealing with Byzantine history have recently appeared (see Nicolas Cheetham's Medieval Greece, LJ 3/15/81 and Antony Bridge's Theodora, LJ 6/15/84), but this is probably the most comprehensive survey for the general reader and tourist. The first of a projected three-volume study, this elegantly written tribute to the Western debt to Byzantium traces the history of the city from the birth of Constantine c.274 to the coronation of Charlemagne on Christmas Day 800. While slight attention is given to ordinary people, and the approach is very Eurocentric, all the great figures of early Byzantine history are here; the architectural monuments, theological controversies, the notorious sexual tastes of many emperors, and the proverbially ``Byzantine'' court intrigues are lucidly described. For general collections.-- Bennett D. Hill, Georgetown Univ., Washington, D.C. (c) Copyright 2010. Library Journals LLC, a wholly owned subsidiary of Media Source, Inc. No redistribution permitted.

Byzantium lasted over 1,000 years; hence there is difficulty in offering both narration and interpretation. Edward Gibbon, of course, did it in his Decline and Fall, still valuable, but today authors and publishers do not produce such large works. Charles Diehl's Byzantium: Greatness and Decline (1957) is probably the best single-volume survey of Byzantine politics and culture, and G. Ostrogorsky's History of the Byzantine State (CH, May '70) is the unrivaled account of political events and institutions. Cyril Mango's Byzantium: The Empire of New Rome (CH, Jul '81) is a fine interpretation of culture and art; D. Obolenski's very individual The Byzantine Commonwealth (CH, Mar '72) makes important connections with Eastern Europe and Russia. The present work is very different from these titles for it is primarily a narrative of events and personalities from 300 to 800 CE, written in an engaging and entertaining style that cannot fail to charm. Norwich has written solid works on Venice and Sicily. Here he shows a thorough grasp of the sources but little attention is paid to institutions and ideologies; the great developments pass before us as part of a "saga." Contains some fine color illustrations and a complete annotated list of pre-800 Istanbul monuments. Byzantium is a work for the cultivated reader and traveler, but not for college libraries. -R. I. Frank, University of California, Irvine

The first of a projected three-volume popular history of the Byzantine Empire, this work from Norwich (A Taste For Travel: An Anthology, 1987, A History of Venice, 1982) is fact-filled and breezy, but without any real depth. Covering the years from Constantine the Great and his pivotal decisions to move to the East and embrace Christianity, through the elevation of Charlemagne to Emperor in the West, this is a curiously hollow piece of work. Norwich brings to it enthusiasm, pointed humor (On Leo IV: "". . .allowance, however, must be made for two cruel handicaps with which he had to contend throughout his short reign. One was the disease. . .which was to kill him. . .The other was his wife, Irene""), and all the available references. Thus we get a detailed chronicle of court intrigues, couplings, and conspiracies, of the ongoing religious conflicts and heresies--Pagan/Christian, Arian, monophysite, iconoclast/ iconodule--that ultimately brought about schism with the West; and of constant warfare with Persia, the nation of Islam, the hordes of Asia, and barbarians of the North who reduced the Western Empire to rubble. But Norwich gives us no sense of the texture of the times, no feel for the life and culture of these people. The basic economics of Empire are barely touched on, customs, and manners are overlooked, and those outside of court circles might not even have existed. Still, an amusing and erudite account--with enough broad appeal to forgive its lapses of rigorous reportage and analysis. Copyright ©Kirkus Reviews, used with permission.
More book reviews at iDreamBooks.com