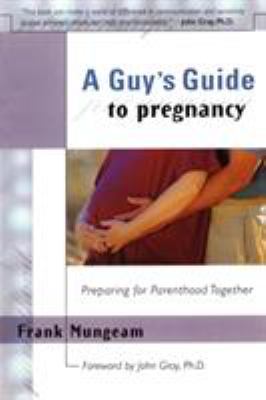 A guy's guide to pregnancy : preparing for parenthood together / Frank Mungeam.

Every day, four thousand American men become first-time dads. There are literally hundreds of pregnancy guidebooks aimed at women, but guys rarely rate more than a footnote. A Guy's Guide to Pregnancy is the first book to explain in "guy terms" the changes that happen to a guy's partner and their relationship during pregnancy, using a humorous yet insightful approach.

Future fathers will find out what to expect when they enter the "Pregnancy Zone." They'll discover the right and wrong answers to Trick Questions like "Do I look fat?" They'll also learn baby-shower etiquette ("It's sooo cute!"), the truth about sex during pregnancy (yes, you can touch her) and Boys' Night Out (negotiate it), plus delivery room dos (stay upright) and don'ts (complain about missing the big game).

A Guy's Guide to Pregnancy is designed to be guy-friendly -- approachable in appearance as well as content and length. It is divided into forty brisk chapters, one for each week of the pregnancy.

Frank Mungeam is the executive producer of local programs at the ABC-TV affiliate in Portland, Oregon, supervising the Emmy-nominated daily live talk show AM Northwest and the series Parenting in the 90's. Mungeam combines his years of expertise as a communicator and his personal experiences as an expectant dad to create a humorous yet helpful guide for guys.