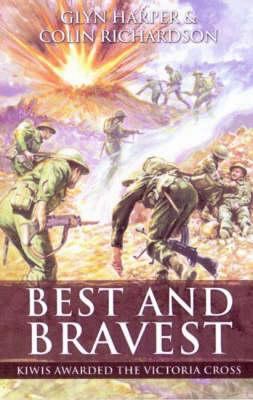 Best and Bravest is the children's version of In the Face of the Enemy, (publishing ANZAC 2006) a history of New Zealanders and the Victoria Cross. Including all the VC winners from the First and Second World Wars, authors Glyn Harper and Colin Richardson have told the stories of the courageous men who were awarded our highest military decoration. These include the well known (Charles Upham, Moana-nui a kiwa Ngarimu, Clive Hulme, Jimmy Ward and many others), as well as those less well-remembered. All three services are represented and stirring stories of wing walkers, daring raids, courageous advances against huge odds, and awe-inspiring courage under fire make it a fascinating and invaluable additional to our historical record for children. A simple introduction to each man is followed by an account of how he won his award, and what happened to him afterwards. Poignant and inspiring, the tales of self sacrifice courage and extraordinary deeds by otherwise ordinary men in the field of battle will provide excellent background material for history and language units.An excellent resource for motivating reluctant readers, especially boys, and well suited to classroom and individual reading.

Children's version of "In the face of the enemy."

Stories of 26 men who won the VC in the First World War and the Second World War, our Kiwi fighting heroes. Including Jimmy Ward, who crawled across a burning bomber wing to put out a fire while flying over the English Channel, Clive Hulme's daring raids behind enemy lines, Moananui-a-Kiwa Ngarimu's defence against huge odds and Charles Upham's awe-inspiring courage under fire. Suggested level: intermediate, secondary.

Children's version of "In the Face of the Enemy."