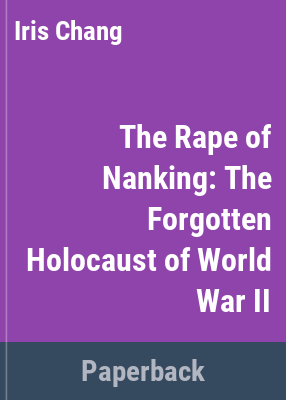 The rape of Nanking : the forgotten holocaust of World War II

In December 1937, in what was then the capital of China, one of the most brutal massacres in the long annals of wartime barbarity occurred. The Japanese army swept into the ancient city of Nanking and within weeks not only looted and burned the defenceless city, but systematically raped, tortured and murdered more than 300000 Chinese civilians.

When Japan occupied China in 1937, its army subjected NankingÄthen China's capitalÄto brutalities on a scale matched only by Nazi Germany's treatment of European Jews. Precise figures are unobtainable, but in only a few weeks, the Japanese appear to have killed 300,000 civiliansÄmany in ways too unspeakable to describe. However, despite the scale of these atrocities, the event has been virtually unknown to the outside world. This book will go a long way toward correcting that deficiency. Drawing on long-neglected documentation and interviews with Nanking survivors, Chang (Thread of the Silkworm) has written a forceful narrative that not only reconstructs the grisly events in detail but analyzes Japan's reluctance to admit its responsibility. Many library patrons will prefer to listen to Blackstone's unabridged recording, while others may wish to limit their descent into hell to this three-hour abridgment, which, with Barbara Rosenblatt's strong reading, delivers the full message.ÄKent Rasmussen, Thousand Oaks, CA (c) Copyright 2010. Library Journals LLC, a wholly owned subsidiary of Media Source, Inc. No redistribution permitted.

The Japanese sack of the Chinese capital Nanking is surely among the world's worst atrocities. In 1937, Japanese forces captured the city and embarked on an orgy of rape, murder and destruction of property unparalleled in scope anywhere to that date. Estimates of those killed within a few days range upward of 350,000. Chang, a freelance writer, first heard about what came to be known as the Rape of Nanking from her parents, who fled China after WWII and settled in the U.S. The author's extensive research lays bare the depravity of Japanese conduct during the war and the heroic resistance of members of the international community in Nanking, who established a safety zone, at great personal risk, to shelter countless thousands of Chinese refugees. One of the unsung heroes of the tragedy is John Rabe, an influential Nazi German in the city who tried without avail to use his influence with Hitler to stop the massacre. Chang's account also takes Japan to task for failing to acknowledge its role in the bloodbath, noting that many high-level Japanese officials still refuse to admit their country's complicity. Likening the siege of Nanking to the recent genocide in Bosnia and Rwanda, the author reminds us that "civilization itself is tissue-thin." A compelling, agonizing chronicle. (Dec.) (c) Copyright PWxyz, LLC. All rights reserved

YAThe events in this book are horribly off-putting, which, paradoxically, is why they must be remembered. Chang tells of the Sino-Japanese War atrocities perpetrated by the invading Japanese army in Nanking in December 1937, in which roughly 350,000 soldiers and civilians were slaughtered in an eight-week period, many of them having been raped and/or tortured first. Not only are readers given many of the gory detailswith picturesbut they are also told of the heroism of some members of a small foreign contingent, particularly of a Nazi businessman who resided in China for 30 years. The story of his bravery lends the ironic touch of someone with evil credentials doing good. Once the author finishes with the atrocities, she proceeds with the equally absorbing and much easier-to-take story of what happened to the Nazi businessman when he returned to Germany and the war ended. This by itself is material for a movie. The author tells why the Japanese government not only allowed the atrocities to occur but also refused, and continues to refuse, to acknowledge that they happened. She is quite evenhanded in reminding readers that every culture has some episode like this in its history; what makes this one important is the number of people killed and tortured, the sadism, and the ongoing Japanese denial of responsibility. Mature readers will look beyond the sensational acts of cruelty to ponder the horror of man's inhumanity to man and the examples of heroism in the midst of savagery.Judy McAloon, Potomac Library, Prince William County, VA (c) Copyright 2010. Library Journals LLC, a wholly owned subsidiary of Media Source, Inc. No redistribution permitted.

The Japanese have been preoccupied with their wartime role as sufferers, not as conquerors, and this historical amnesia severely affects Japan's current relations with Korea and China. Japan's war in China was brutish, as Chang's powerful book vividly shows. The Japanese capture of Nanking is a chronicle of protracted, studied bestiality; at least a quarter of a million Chinese died, many of them civilians. Yet this has been a forgotten event, characterized by the silence of the victims as well as the perpetrators. Who was responsible? The possible involvement of members of Japan's imperial family has seemingly discouraged investigations in Japan. Chang, an American journalist, has done good research, unearthing some eyewitness accounts (including one by a German businessman and member of the Nazi Party) that make much clearer what happened. Just why it happened remains muddy, but the episode is certainly a cautionary tale of how young men can run amok in the environment of war. All levels. J. C. Perry Tufts University

In December 1937, the Japanese army captured Nanking, then China's capital. Thereafter Japanese embarked on two months of mass murder that have come to be called the rape of Nanking and during which as many as a third of a million Chinese may have been killed. Most survivors owed their lives to the heroic efforts of foreign residents, including a German engineer who was head of the local Nazi Party. Although thoroughly documented then and since, the rape of Nanking has been largely ignored by subsequent generations, as China and the West built new and better relations with Japan. This ignorance now seems part of the Japanese effort to portray themselves as innocent victims in the Pacific war. But if the events in Nanking are appalling in one way, Japanese editing of history is appalling in another. Chang's book is a memorial to the victims of Nan-king, a damning indictment of Japanese political historiography, a valuable addition to Pacific war literature, and a literary model of how to speak about the unspeakable. --Roland Green

Billing itself as the first English-language history devoted to the Japanese Army's 1937 massacre in China's capital, this slight account will by no means be the last word. Repeated references to Schindler's List point to the problem with this overdigested version of the past: It reads like a treatment for a probably inevitable cinema version of the hideous incident. Its economical, blandly shocking anecdotes of crimes against humanity and its cardboard heroes suggest scenes ready-made for screenwritten history. Thus, while rigorous in its moral earnestness, the book is inadequate as a history. After a minimal background chapter on Japanese militarism, Chang, a freelance journalist, describes the Japanese assault on Nanking. The specifics are deeply horrific: Over a period of several months Japanese soldiers killed approximately a quarter of a million Chinese, almost all of them noncombatants, including the elderly, women, and children. But the potential ingredients of a skillfully woven narrative are separated here into lifeless clumps of facts--catalogues of atrocities by kind; tiny summaries of topics of significant contextual interest, like foreign intelligence concerning the massacre; and probably gripping oral recollections flattened into clunky prose (""of the hundreds of people killed that day . . . Tang was the only survivor""). Chang tells only as much as one needs to know to indignantly draw the familiar lessons for humanity--""the frightening ease with which the mind can accept genocide, turning us all into passive spectators to the unthinkable."" What's needed is to vivify such truths with intense historical reality. Chang fails because he rushes to simplify complex events and to universalize what happened at the expense of a careful, comprehensive appreciation of a world violently destroyed. Copyright ©Kirkus Reviews, used with permission.
More book reviews at iDreamBooks.com