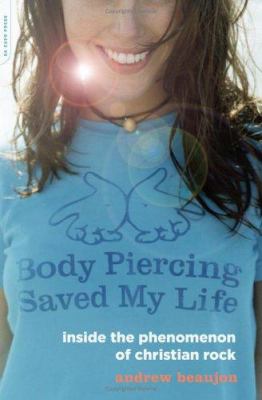 Body piercing saved my life : inside the phenomenon of Christian rock / Andrew Beaujon.

Body Piercing Saved My Life is the first in-depth journalistic investigation into a subculture so large that it's erroneous to even call it a subculture: Christian rock. Christian rock culture is booming, not only with bands but with extreme teen Bibles, skateboarding ministries, Christian tattoo parlors, paintball parks, coffeehouses, and nightclubs,encouraging kids to form their own communities apart from the mainstream. Profiling such successful Christian rock bands as P.O.D., Switchfoot, Creed, Evanescence, and Sixpence None the Richer, as well as the phenomenally successful Seattle Christian record label Tooth & Nail, enormous Christian rock festivals, and more, Spin journalist Andrew Beaujon lifts the veil on a thriving scene that operates beneath the secular world's radar. Revealing, sympathetic, and groundbreaking, Body Piercing Saved My Life (named for a popular Christian rock T-shirt depicting Christ's wounds) is a fascinating look into the hearts and minds of an enormous, and growing, youth culture.

Taking his title from a popular T-shirt depicting Christ's wounds, music journalist Beaujon (the Guardian; the Washington Post) chronicles the Christian rock subculture, beginning with the "Jesus People" of the early 1970s to its substantial popularity today. Artists like P.O.D., Switchfoot, Evanescence, Creed, Pedro the Lion, and Sixpence None the Richer, along with important Christian rock record labels and music festivals, are profiled. As the book unfolds, readers learn more than just the facts-Beaujon reacts to the music and interacts with the artists, producers, and record company executives. Yet he never takes the approach of a Hunter S. Thompson or a Nick Tosches, keeping the focus on the music. This important, well-written study of the Christian rock phenomenon brings the personalities to life. Highly recommended for all public libraries and for all academic libraries with popular culture, religious studies, and popular music collections.-James E. Perone, Mount Union Coll., Alliance, OH (c) Copyright 2010. Library Journals LLC, a wholly owned subsidiary of Media Source, Inc. No redistribution permitted.

According to Beaujon, contributing writer for Spin, sales of Christian music totaled 47 million albums in 2003- outselling jazz, classical music and New Age combined, with sales climbing 10% each year for the past five years. Beaujon came up with the title of his book from a T-shirt he saw at the Cornerstone Christian music festival depicting Jesus's hands with holes in them. In addition to promoting fundamentalist evangelical Christianity, such messages, Beaujon explains, delivered in either folky ballad lilts or throat-wrenching Steven Tyleresque heavy metal screams, are strongly antiabortion ("stop killing my generation"), staunchly conservative (70% of Christian rockers and their fans are Republicans) and provirginity ("dating is prostitution"). Beaujon developed the book from a series of pieces written for Spin and, consequently, the text reads like pithy, onsite, you-are-there set pieces.In "Black and White in a Gray World," he profiles a day in the life of youthful prolife Christian rockers who tout their anticontraception, antiabortion and anti-stem cell research messages through prolife rock music. Many of Beaujon's musical references may be obscure to those over 25, but his insider view of the ideologically passionate world of Christian rock is compelling. Beaujon-an agnostic-reports well but passes no judgment. (June) (c) Copyright PWxyz, LLC. All rights reserved

Adult/High School-Beaujon's odyssey takes him from the Midwestern and Southern roots of Christian music to its place in and around the fringes of Seattle's independent music industry. His analysis is a blend of the eclectic history of the Christian rock culture (where else would you find out that early star Martha Stevens came out as a lesbian and got written out of the official histories?), the current music scene, and interviews with Christian rock "lifers": individuals whose work has fundamentally shaped the movement and industry. His portraits of the rebels, notably David Bazan of Pedro the Lion, and Tooth and Nail's producer Brandon Ebel, are particularly engaging and compelling. Equally interesting are the insights that the author, a self-confessed agnostic, offers about evangelical Christian culture and what it represents about American life.-Sallie Barringer, Walnut Hills High School, Cincinnati, OH (c) Copyright 2010. Library Journals LLC, a wholly owned subsidiary of Media Source, Inc. No redistribution permitted.

A rock journalist who stepped outside his usual secular world to spend over a year observing rock dedicated to fundamentalist Christian principles, Beaujon describes a huge enterprise aimed at a nationwide, even international, youth culture bound together by belief in personal salvation and the desire to celebrate this decision through its own music. The book's title refers to a popular T-shirt depicting the pierced hands of Jesus. Beaujon interviewed performers, agents, record producers, magazine publishers, and bookstore owners; witnessed concerts at churches, coffeehouses, nightclubs, and festivals; and did relevant background reading with an eye toward understanding "whether Christian music can ... transform itself from being simply a lifestyle accessory to becoming an enduring part of American culture." He concludes that Christian rock has the "swagger" (confidence), the ability to "wing it" ("self-guided study"), and the "production values" (showbiz) to make it a distinctively American music. Joining Jay Howard and John Streck's Apostles of Rock: The Splintered World of Contemporary Christian Music (CH, Feb'00, 37-3280), an outstanding scholarly overview, Beaujon's book has the casual informative style typical of reportage. But Beaujon covers an impressive amount of material and gives readers an intimate view of a fast-growing movement. ^BSumming Up: Recommended. All readers; all levels. W. K. Kearns emeritus, University of Colorado at Boulder

A look at some of the colorful figures who have transformed the Christian rock scene into a flourishing industry. A non-Christian, but a devoted fan of music and a senior contributing writer for Spin, Beaujon, in his first book, takes an irreverent trip through a booming subculture. He begins by outlining the history of Christian rock, which consisted mostly of embarrassing, albeit somewhat successful, attempts to marry Christian doctrine with rock music. The spandex-clad '80s group Stryper is an early example of the genre, largely due to their penchant for flinging Bibles into the throngs at their concerts, but as Beaujon begins his journey into the contemporary scene, he discovers that Stryper and their ilk are a distant memory for most. With big bucks being generated by Christian rock's flagship labels and artists, the author reveals how the industry has sharpened its act in order to appeal to a younger demographic; indeed, the book takes its title from a popular t-shirt that references the crucifixion wounds of Jesus. Beaujon occasionally inserts into the narrative interviews with some of the main players, such as writer and long-time chronicler of the scene Doug Van Pelt and EMI Christian Music Group CEO Bill Hearn, each of which elicit some eyebrow-raising revelations. And his infectious enthusiasm for his subject and his investigation infuses his prose, although he is occasionally prone to lazy journalese, such as when he lapses into overwrought prose when discussing his own life as the son of a Episcopalian priest. Never condescending to his subjects, the author appears to hold a genuine curiosity as to what makes Christian rockers tick, and they in turn welcome his deliberately na™ve inquiries, making for a refreshingly unbiased view of a subject that many jaded journalists would find easy to mock. Beaujon's wide-eyed interest helps make for a fun, well-balanced account of a fascinating subculture. Copyright ©Kirkus Reviews, used with permission.
More book reviews at iDreamBooks.com