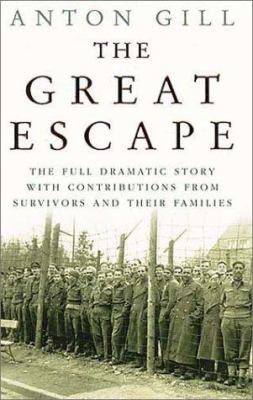 The great escape : the full dramatic story with contributions from survivors and their families / Anton Gill.

On the night of March 24, 1944, 76 Allied RAF officers escaped from Stalag-Luft III, Nazi Germany's most secure POW camp. It was the biggest, most daring break-out of World War II. The tenacity and ingenuity of the prisoners has become the stuff of legend, as they carried out their plan to dig the longest and most sophisticated tunnel ever conceived. But the men paid a high price for their bravery--of the 73 men recaptured, 50 were brutally executed on Hitler's direct orders. The tireless RAF investigation into the atrocity offers a chilling insight into the last hours of the victims and the actions of the killers. Drawing on the meticulous research carried out for the war crimes trial, as well as interviews with survivors and families of the murdered men, Anton Gill gives us the definitive account of the escape and its shocking aftermath. Among the author's many books are The Journey Back from Hell and Art Lover: A Biography of Peggy Guggenheim.