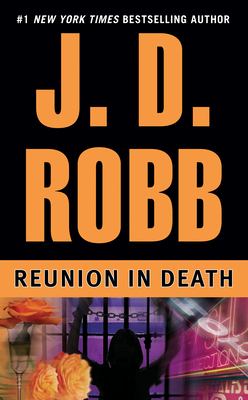 Summary: Walter Pettibone gets the surprise of his life at his surprise birthday, when after a sip of champagne, he drops dead. Julie Dockport, a woman unknown to the party goers, is responsible for the deadly drink. Detective Eve Dallas know Ms. Dockport only too well having been responsible for sending her to prison 10 years earlier. It appears that Ms. Dockport was hoping for a reunion with Detective Dallas--one which she'll never forget.
Tags from this library: No tags from this library for this title. Log in to add tags.
Fiction notes: Click to open in new window
Total holds: 1

A birthday bash sets the scene for a frightening reunion with a killer from Eve Dallas's past in this novel in the #1 New York Times bestselling In Death series. <br> <br> At exactly 7:30 p.m., Walter Pettibone arrived home to over a hundred friends and family shouting, "surprise!" It was his birthday. Although he had known about the planned event for weeks, the real surprise was yet to come. At 8:45 p.m., a woman with emerald eyes and red hair handed him a glass of champagne. One sip of birthday bubbly, and he was dead.<br> <br> No one at the party knew who she was, but Detective Eve Dallas remembers her all too well. Eve was personally responsible for Julianna Dunne's incarceration nearly ten years ago. And now, let out on good behavior, she still has nothing but bad intentions. It appears she wants to meet Dallas again--in a reunion neither will forget...

Walter Pettibone gets the surprise of his life at his surprise birthday, when after a sip of champagne, he drops dead. Julie Dockport, a woman unknown to the party goers, is responsible for the deadly drink. Detective Eve Dallas know Ms. Dockport only too well having been responsible for sending her to prison 10 years earlier. It appears that Ms. Dockport was hoping for a reunion with Detective Dallas--one which she'll never forget.

The most recent chapter of Robb's popular series features Lt. Eve Dallas facing a recently released murderer back to get even. Early in her career, Eve testified against Julianna Dunn, and, during her incarceration, Julianna has been planning how to confuse, humiliate, and ultimately destroy her. This violent reunion begins with the poisoning of middle-aged, wealthy men in seemingly innocuous circumstances on Eve's New York City beat and soon looks like it will culminate with the killing of her husband, Roark. Disconcerting houseguests, a tense visit into Eve's childhood in the city of Dallas, and a comic scene searching for clues in the New York underworld add to the plot and give reader Susan Ericksen the opportunity to charm the listener thoroughly. Her reading is full of color: her accent, pitch, and pacing all add to the listening experience and make this one difficult tape to pause. Recommended for popular collections.-Juleigh Muirhead Clark, John D. Rockefeller Jr. Lib., Colonial Williamsburg Fdn., VA (c) Copyright 2010. Library Journals LLC, a wholly owned subsidiary of Media Source, Inc. No redistribution permitted.

Seasoned author Nora Roberts, writing as Robb, delivers another exhilarating entry in her popular futuristic cop series featuring Eve Dallas (Seduction in Death, etc.). Dallas, a New York police lieutenant, is a hard-bitten warrior cop who buries the pain and anger of her early childhood by excelling on the job. In her latest adventure, all the usual suspects are back: Eve's charismatic husband, Roarke; her plucky assistant, Peabody; and hipster techno-geek McNab. For this round, their objective is to take down a woman Eve arrested 10 years ago, a poisoner named Julianna Dunne. Julianna's out on parole, and now rich old men are dying sudden deaths. What's more, the ex-con wants to exact a little revenge on her one-time adversary. Eve's search for Dunne takes her all over the country, and eventually to Dallas, Tex., the city that gave her both her name and a legacy of violent nightmares. This is a satisfying, well-paced novel that offers readers a little of everything sex, death, family drama and well-orchestrated chase scenes. Although Robb's plot is tight and suspenseful, the real pleasure here comes from watching Eve struggle to maintain her distance from others, even as she finds herself tied ever more closely to her friends and family by the bonds of love. (Mar. 5) Forecast: It's a given that Roberts's books will grace the bestseller charts, but a stylish cover image depicting a ghostly, Manhattan subway entrance may attract new readers. (c) Copyright PWxyz, LLC. All rights reserved

Robb's style is so edgy and raw that at times it's hard to believe that she is also best-selling romancer Nora Roberts. Shortly after wealthy older men with no known enemies start being poisoned, detective Eve Dallas determines that Julianna Dunne, a wily ex-con, is the perpetrator. The beautiful but chameleonlike murderess is using the killings to get to Eve, who had put her behind bars nearly a decade earlier. Eve's pursuit takes her back to her own traumatic roots, thus providing fans of the series with a more detailed description of her horrendous childhood. In addition, Eve mentors her protege, Peabody, with gritty advice: "And when you step down there, you remember you're one bad bitch cop, and you drink blood for breakfast." Fourteenth in the futuristic romantic suspense series, this novel takes place as the lusty marriage of Eve and her husband, the fabulously wealthy Rourke, approaches the one-year mark. --Diana Tixier Herald
More book reviews at iDreamBooks.com