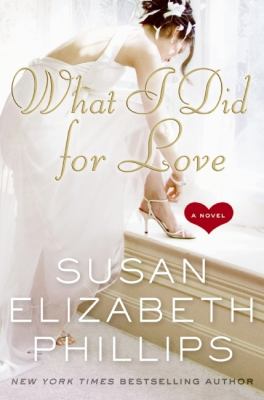 What I did for love / Susan Elizabeth Phillips.

Genre/Form: Romance fiction.DDC classification: Summary: A down-on-her-luck movie actress runs into her detestable former co-star--dreamboat-from-hell Bramwell Shepard--in Las Vegas and gets caught up in a ridiculous incident that leads to a calamitous elopement. Can two enemies find themselves working without a script in a town where the spotlight shines bright...and where the strongest emotions can wear startling disguises?
Tags from this library: No tags from this library for this title. Log in to add tags.
Fiction notes: Click to open in new window

"Writing with both sharp wit and terrific emotional warmth, Phillips delivers another of her supremely satisfying contemporary romances."

-- ChicagoTribune Perennial New York Times bestselling author Susan Elizabeth Phillips is easily one of the most beloved authors of women's fiction in America--and with her wonderfully witty What I Did for Love, she works her magic once again. Turning her satirical eye on Hollywoodand the messy love triangles of its major superstars (think Jennifer Aniston, Brad Pitt, and Angelina Jolie), the incomparable Susan delivers a treasure of a romantic comedy that the Detroit Free Press calls "a laugh-out-loud tale," and Publishers Weekly calls a "massively entertaining romp." Read What I Did for Love and discover why Susan Elizabeth Phillips has won more Favorite Book of the Year Awards from the Romance Writers of America than any other author, including Nora Roberts.

A down-on-her-luck movie actress runs into her detestable former co-star--dreamboat-from-hell Bramwell Shepard--in Las Vegas and gets caught up in a ridiculous incident that leads to a calamitous elopement. Can two enemies find themselves working without a script in a town where the spotlight shines bright...and where the strongest emotions can wear startling disguises?

Phillips follows the Audie Award-winning Natural Born Charmer, an LJ Best Audiobook of 2007, with this novel about Georgie York, a once-adored teenage sitcom star known as Scooter Brown, and her unlikely romance with former costar Bram Shepard. Phillips has a gift for comedy, and here she makes the most of the Hollywood lifestyle and movie star cliches. Actress/narrator Julia Gibson (Belong to Me) takes on each character with enthusiasm, deftly moving between miserable Georgie-"What would Scooter do?"-and her confident alter ego. Gibson's portrayal of grumpy housekeeper Chaz is especially on the mark; as Gibson punches out her words, you can feel Chaz's impatience and annoyance with the world. A charming production recommended for all. [Audio clip available through www.harperaudio.com; the Morrow hc was described as a "quintessentially Phillips book" that "all public libraries should want," LJ 2/15/09.-Ed.]-Juleigh Muirhead Clark, Colonial Williamsburg Fdn. Lib., VA (c) Copyright 2010. Library Journals LLC, a wholly owned subsidiary of Media Source, Inc. No redistribution permitted.

Phillips (It Had to Be You) makes old Hollywood gossip new again in this over-the-top, hot-under-the-sheets rom-com. Sitcom Skip and Scooter co-stars Georgie York, who like her character exudes spunky charm, and Bram Shepard, whose upbringing couldn't be more different from the nice boy he plays, hate each other even before Bram's offscreen sexual escapades lead to the sitcom's cancellation. Flash forward eight years: his career has cratered, and her biggest accomplishment has been briefly marrying hunky star Lance Marks, who abandons her for sex-goddess-turned-international-do-gooder Jade Gentry. So when Bram and Georgie wake up from a Vegas bender and find themselves married to each other, they make the most of it: Georgie aims to undo the damage Lance has done to her heart and her public image, while Bram is gunning for a second chance at life, love and stardom. It's a blast to watch the hate-each-other-yet-made-for-each-other couple as they duck paparazzi or spar before falling into bed. In this massively entertaining romp, redemption is always possible, and even a fake Hollywood couple trapped in a pretend marriage might find true love. (Feb.) (c) Copyright PWxyz, LLC. All rights reserved

After a successful run as America's favorite sitcom heroine, Georgie finds that her future as a film star is going nowhere fast. If a career in a downward spiral isn't bad enough, Georgie's Hollywood heartthrob husband, Lance Marks, has dumped her for sultry, sexy Jade Gentry, and  Georgie has also just learned that the happy couple is expecting. Georgie's life hits an even lower level of hellish humiliation when her attempts to repair her public image lead her to Las Vegas. There, fueled by one too many drinks, Georgie wakes up married to Bram Shephard, her former sitcom costar and her first great love. Desperate to keep from becoming tabloid fodder, Georgie works out an agreement with Bram that will keep them together for at least six months or until one of them kills the other. Best-selling, RITA Award winner Phillips delivers another delectable contemporary romance rich with her signature elements: flawless writing tempered with sharp wit, superbly crafted secondary characters, and sizzling chemistry between a charmingly resourceful heroine and an irresistibly roguish hero. What I Did for Love is another guaranteed winner from one of the romance genre's leading stars.--Charles, John Copyright 2008 Booklist

Two Hollywood actors who hate each other but accidentally get married discover they love each other after all. To call this connect-the-dots, love/hate contemporary romance by Phillips (Natural Born Charmer, 2007, etc.) formulaic would be to state the obvious. Its heroine is Georgie York, who found teenage fame co-starring in the hit TV show Skip and Scooter until her gorgeous-but-loathsome bad-boy co-star Bram Shepard caused the show to fall apart. Now 31, Georgie, aka "America's Sweetheart," is still licking her wounds after her action-adventure-superstar husband Lance left her for Jade Gentry, the beautiful actress who also devotes herself to humanitarian causes (Jennifer Aniston, Brad Pitt and Angelina Jolie anyone?). On a trip to Las Vegas intended to cheer her up, Georgie gets drunk and wakes up with Bram and a marriage license (coincidentally, a similar thing happened on Friends to Aniston's character Rachel, who woke up in Las Vegas married to Ross). For the sake of her image and career, she can't afford to be seen divorcing again so soon, so the couple decides to stay married for a year. In fact, Bram has cleaned up his act but is using the marriage to boost his image in order to get a film project off the ground. Despite ex-husbands, controlling fathers and mutinous staff, the couple's proximity leads to attraction, which leads to great sex, which leads to the revelations that scurrilous Bram is really a multitalented gentleman; that pathetic Georgie is independent and irresistible; and that all their professional and personal dreams will come true. Stretched to more than 400 pages, this chilly fairy tale is for devotees of the genre only. Copyright Kirkus Reviews, used with permission.
More book reviews at iDreamBooks.com