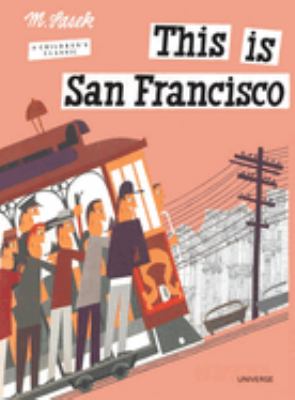 This is San Francisco / M. Sasek.

Let the rumbling cable car tell you the story! And what a story: From the crookedest street in the world to the Peking ducks in Chinatown, San Francisco is easily one of the world's most enchanting cities. Illustrator Miroslav Sasek captures both the breathtaking landscape and the cosmopolitan flavor of the City by the Bay in This is San Francisco. First published in 1962, Sasek's jaunty, colorful illustrations will still dazzle kids and adults alike.

A pictorial tour of the city by the Golden Gate, presenting drawings of its hills, cable cars, harbor, bridges, market areas, and flower stalls.

While their sophisticated early sixties flair remains undimmed, these two lighthearted travelogues are as much portraits of another time as they are of particular places. Discreet asterisks direct readers to the back of each book for updated information, but forty years on have made these books nostalgia items for stylish adults. [Review covers these titles: [cf2]This is New York[cf1] and [cf2]This is San Francisco[cf1].] From HORN BOOK Spring 2004, (c) Copyright 2010. The Horn Book, Inc., a wholly owned subsidiary of Media Source, Inc. No redistribution permitted.
More book reviews at iDreamBooks.com