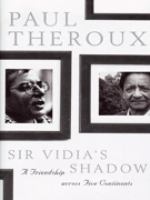 The subject of considerable attention well ahead of its publication date (which the publisher has now moved up), this frank and revealing study of two writers, longtime friends and mutual supporters, who finally come to a decisive parting of the ways, is sometimes sad, often funny and occasionally touching. Such is Theroux's apparently effortless recall of conversations, scenes and currents of feeling that it reads more like a novel with a particularly vivid central character than a memoir. That central character is of course the novelist V.S. Naipaul, seen here as brilliant, eccentric, irascible, often, it seems, purposefully outrageous. The two met in Africa in 1966 when Theroux was just beginning as a writer and Naipaul was already an acknowledged star. Theroux, who portrays himself as much more accommodating than Naipaul, puts himself in the background, delighted with each crumb of approbation from the master. There were many things Theroux found odd about his friend: his snobbishness, his apparent racism, his selfish willingness to let other people take care of his every need. (He recalls one especially costly meal with Naipaul, for which he paid, as usual, that left him without the fare home.) But it seems to have been Pat, Naipaul's long-suffering English wife, who finally came between them; Theroux, who confesses to having once pondered an affair with her, remained always an admirer of her decent stoicism, and wrote a touching tribute on her death. This was then seized upon by Naipaul's hastily married second wife (a Pakistani newspaper columnist who would seem, in her bumptiousness and careless writing, the antithesis of everything Naipaul cherished) to create a rift with Theroux. A last chance meeting in the street produced Naipaul's memorable line "Take it on the chin and move on," and the indefatigable Theroux had himself the theme for this vastly readable book. Is it fair to Sir Vidia? Impossible to be sure, but it is an enthralling examination of a seldom-treated subject, a thorny literary friendship. First serial to the New Yorker; author tour. (Oct.) (c) Copyright PWxyz, LLC. All rights reserved

This is the book that has the literary world buzzing. In it, distinguished novelist Theroux paints a not particularly pleasant portrait of his former best friend, the even more distinguished novelist V. S. Naipaul. Theroux met Naipaul 30 years ago in Africa; the former was teaching in Uganda, and the latter came there as a visiting lecturer. They hung out together, and Naipaul nurtured Theroux as a fiction writer; however, Theroux realized from the outset that his mentor was not an easy personality to deal with--that he was, in fact, "absolutely the most difficult" person he had ever met. Still, their friendship persisted through long separations as, after each one left Africa, they followed other pursuits. Theroux insists that Naipaul "was . . . brilliant, and passionate in his convictions, and to be with him, as a friend or fellow writer, I had always to be at my best." Naipaul loomed large in Theroux's life ever after; he continued to believe in and support Theroux's writing, which, of course, was the most important role he could have played in the younger writer's life. But recently they had a falling out over what seems to have been a petty situation, and Theroux's account, in bringing the story up to date, ends on a sour note, leaving the reader to wonder why, if he knew Naipaul had a mean, nasty side, he was so surprised about Naipaul's behavior in this particular situation. Although their parting is predictable, the book reads like a good Theroux novel. Expect interest, since the prepublication publicity has been heavy. --Brad Hooper

The detailed story of a long, top-heavy friendship that took a sudden nosedive, from novelist and travel writer Theroux (Kowloon Tong, 1997, etc.). They met in Africa 30 years ago: Theroux was 23, a university lecturer and aspiring writer; V.S. Naipaul (Vidia) was only 34 and already a respected writer. Theroux was ready to please: ``He was stimulating and tiring to be with, like a brilliant demanding childneedy, exhausting, funny, often making a po-faced joke just to please me, and who was I?'' What is clearly a teacher-student relationship deepens into an ill-balanced if mutually advantageous friendship. Theroux needed encouragement to build confidence as a writer. Naipaul needed someone to buff is ego, nurse his ills, pay the lunch bill. This Theroux did, bearing Naipaul's dismissive manner, his mockery and imperiousness. Theroux put up with all this because he was awed by Naipaul's talent, because ``his talk was unexpected and original. He was contrary and he was often right.'' And perhaps Theroux was smitten, confused; he might like to believe that ``I could say what I wanted to him,'' but really ``you got nowhere arguing with Vidia. You needed to listen, to indulge him, not to debate every illogical point.'' One day, apparently out of the blue, Naipaul writes Theroux off. Baffled and hurt, Theroux is nevertheless now a grown-up who has felt pain before. He vents a little (Naipaul had ``stopped trying to please the reader. He lost his humor, he blunted his descriptive gift''), though not peevishly. It would be overmuch to say Theroux sighed with relief at the end; yet, undeniably, there is a sense of liberation. This friendship is no easy subject for portraitureoblique, intuitive, unspoken, irrational as it often is. Theroux does his best to explicate, filling this memoir with telling incidents, blending passion with dispassion, writing with elegance. As for Naipaul: ``Never give anyone a second chance.''