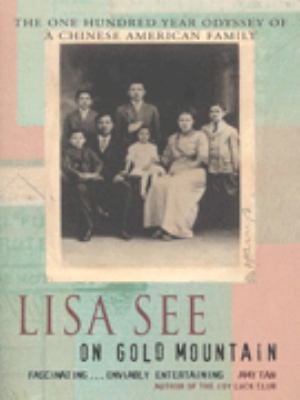 On gold mountain : the one hundred year odyssey of my Chinese-American family

A family portrait that is at once particular and universal, telling the story not only of one family, but of the Chinese people in America, and of America itself, a country that both welcomes and reviles its immigrants like no other culture in the world.

See, the West Coast columnist for Publishers Weekly, has produced an insightful account of her family. In 1871, Fong See left China to search for his father, who had come to work on the U.S. transcontinental railroad. Fong See eventually settled in Sacramento, California, and established a factory that made lingerie for brothels. He went on to found an Asian arts store in Los Angeles, had four wives and 12 children, and lived to be 100. This is an unusual account, for See's family did not follow the path of most Chinese Americans: Fong See broke the law (in effect till 1947) and married a Caucasian before moving to Los Angeles. In addition, See effectively integrates historical material on China and America with straightforward genealogy. This book helps fill the void of material on the Chinese American experience in the United States. Recommended for all academic and public libraries.-Dennis L. Noble, Sequim, Wash. (c) Copyright 2010. Library Journals LLC, a wholly owned subsidiary of Media Source, Inc. No redistribution permitted.

The See family history is becoming public property. First mother Carolyn with Dreaming (Nonfiction Forecasts, Jan. 2) and now daughter Lisabut with something far different in mind. Always aware of her part-Chinese roots, she set out five years ago to learn about her far-flung and, as it turns out, famous paternal family. Her great-grandfather Fong See was an extraordinary figure. He established a business in Sacramento, Calif., and later in Los Angeles, when it was an unheard-of thing for a Chinese to do; married a Caucasian and fathered a large brood; returned to China on and off, spreading his wealth around in his tiny native village and creating another extensive family there too. Drawing on family legends and dredging up intimate history through countless interviews with uncles, aunts and cousins both in California and in China, See, PW's West Coast correspondent, has created a matchless portrait not only of a remarkable family but of a century's changing attitudes. The early anti-Chinese racism was horrific, and even 40 years ago it was hard for a Chinese to emigrate here, let alone become a citizen. The ambitions, fears, loves and sorrows of See's huge cast are set forth with the storytelling skills of a novelistand a great, sprawling novel is what her book often resembles. There are times when it flags and the constant new names become tiresome, and a heartfelt but superfluous chapter on actress Anna May Wong disrupts the flow; but the book is a striking piece of social history made immediate and gripping. Photos. 60,000 first printing; Literary Guild alternate. (Aug.) (c) Copyright PWxyz, LLC. All rights reserved

YAIn 1871, Fong See left his village in China to find his father and three older brothers, who had come to the U.S. years earlier. He found his father running an herbal emporium in Sacramento; when the man returned to China, Fong See remained, and his brothers followed him into a new businessmanufacturing split underwear for prostitutes. An orphaned teen, red-headed Letticie Pruett, was determined to prove herself indispensable to Fong See in his work, especially in his dealings with whites. The story of Ticie and Suie becomes the major thread of this family history. The evolution of the F. See On Company, one of Los Angeles's major Asian art stores; the give and take of Ticie and Suie's marriage; the lives of their four children; their journeys back to China; their divorce; Ticie's single life; and Suie's new family enliven this saga. Teens are offered an initimate glimpse of these people and witness instance after instance of the discrimination they suffered.Barbara Hawkins, Oakton High School, Fairfax, VA (c) Copyright 2010. Library Journals LLC, a wholly owned subsidiary of Media Source, Inc. No redistribution permitted.

See's chronicle melds together the life stories of her Chinese and American ancestors, beginning with a great-great-grandfather's journey from China to San Francisco. In depicting these myriad lives, See composes a brilliant tapestry--a fabric enlivened by the cultural diversity of an extended family that will surely resonate for readers of all backgrounds. Unfolding amid the context of California's economic and social development, See's tale is most specific in its descriptions of the hardships and discrimination endured for decades by large numbers of Chinese immigrants. And although her mesmerizing family history starts out by tracing the accomplishments of a poor peasant trained as an herbalist, it goes on to celebrate the resourcefulness and often quite formidable achievements of generations of family members up to the present day. --Alice Joyce

Despite some unanswered questions, a copiously researched history and a page-turning read. Fong See, the author's Chinese great-grandfather, came to the US as a teenager in 1871. Lisa See's first book takes us through his marriage to a white woman, Letticie Pruett; decades as a Californian entrepreneur (initially selling underwear to prostitutes, later becoming a renowned dealer of rare Chinese antiques); subsequent marriages to much younger Chinese women; 12 children; and numerous trips back to China. The family personalities come alive in See's historythe Prohibition-era alcoholics, the lonely white women who married See men, Letticie's refusal to be a traditionally obedient Chinese wife (though in many ways she identified with Chinese people, once explaining to a white visitor why ``we'' do not like to be called ``Chinamen''), and Fong See's Eurasian sons, whose ``exotic'' looks helped them become dashing Los Angeles playboys. See also provides admirable historical context, always taking stock of political developments in both the US and China and explaining how they might have affected her family. Using interviews, government records, newspaper clippings, and sales slips, among other documents, See has constructed an absorbing multigenerational family saga. The narrative is marred only by a tendency to push the boundaries of fictionalization. All biographers have to do some guesswork, but See at times frustrates by not telling us how much of her account is speculation. For instance, in the chapter on actress Anna May Wong, dubiously titled ``Anna May Speaks (From the Grave),'' it is clear that See has made up Wong's words, but her sourcing doesn't reveal how much she knows about the real Anna May's thoughts and feelings. Fact/fiction ambiguities aside, an invaluable document of immigrant experience that raises complex questions about identity in American culture. (Author tour)
More book reviews at iDreamBooks.com