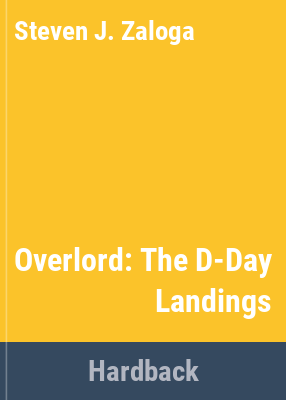 Operation Overlord was the largest amphibious military operation ever launched, with a vast armada transporting over 150,000 Allied soldiers across the Channel. Just after dawn on 6 June 1944, the Allied troops assaulted the beaches of the Cotentin peninsula against stiff German resistance. Coordinated with the amphibious landings were a number of aerial assaults that carried out crucial missions to take key areas, enable the vital link up between the beaches. Casualties sustained by some units during the invasion were horrendous, but the assaults were successful. This book looks in detail at the plans and build-up to the operation, and discusses the events of D-Day in each of the key areas of the operation.

Osprey has applied its highly effective formula to D-Day. There's nothing new here-this work is essentially a hardcover amalgamation of four shorter Osprey efforts that were in Osprey's more usual paperback format-but readers will conveniently find good research by two practiced authors who are thoroughly familiar with their subject from both Allied and German perspectives. There are thoughtfully selected pictures and Osprey's usual excellent diagrams of battles. This comprehensive work will do good service in library circulation as a sturdy rendering of the earlier separate volumes. Highly recommended.-EB (c) Copyright 2010. Library Journals LLC, a wholly owned subsidiary of Media Source, Inc. No redistribution permitted.
More book reviews at iDreamBooks.com