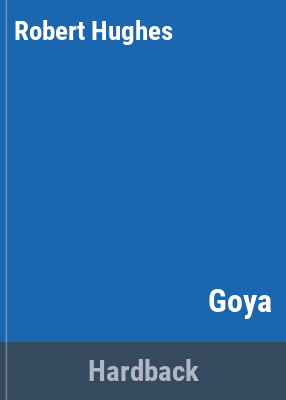 The starting point of this journey through Goya's life in 18th-century Spain is Hughes' own first encounter with the artist's work when he was a student in Australia. The remainder of the book charts the artist's entire career, describing his painted and graphic oeuvre within its historial context. Particular attention is paid to Goya's patrons, his favourite themes (portraits, scenes of warfare and terror, satirical prints and so on), his criticism of the Catholic Church and encounters with the Inquisition, his fierce anti-war stance and his reputation in his lifetime. What emerges is a picture of an artist deeply engaged with life around him and fully committed to documenting it with an unflinching eye for truth and injustice.

A long life and vast works make fitting subjects for the epic-minded Hughes (The Shock of the New, etc.). Born in Aragon in 1746, Goya weathered the Peninsular Wars (1808-1814) in Spain and lived to the age of 82, when he died in self-imposed exile in France. Hughes denies the popular image of the artist as a die-hard iconoclast, painting court portraits while winking behind his patrons' backs. Staying close to the visual evidence, Hughes shows Goya was not above flattering his royal subjects (aggrandizing midget count Altamira), waxing patriotic (as in the famous Third of May) and taking commissions from the Bonapartes under the French occupation. In middle age he was struck deaf by an unidentifiable illness, at which point his pictures turned darker-a bullfighter gored before eager spectators, the inmates of a madhouse clamoring for respite. His Desastres de la guerra rendered the mute, gaping horror of guerrilla combat. Under a picture of refugees fleeing the French, he inscribed, "I saw it." Whether or not this much debated act of witness really happened, for Hughes it is Goya's urgent visual economy that "invented... the illusion of being there when dreadful things happen." Given his intimate understanding of the painter, one regrets that Hughes's diligent catalogues of the Caprichos and Pinturas Negras (among the 115 color and 100 b&w illustrations) often forgo in-depth analysis for textbook thoroughness. But he compellingly insists on Goya's prophetic genius, arguing that, for an age that has produced few great paintings in response to modern terrors, Goya's pictures anticipate disasters unheard of but yet to arrive. (Nov. 10) Forecast: With a first printing of 75,000 and a first serial in Vanity Fair, the bet clearly is that readers will agree with Hughes's assessment. A new survey of Goya's oeuvre by former Kunsthalle Hamberg director Werner Hofmann, also titled Goya, is scheduled to arrive two weeks after Hughes book, and includes 253 color illustrations. (Thames & Hudson, $75 336p ISBN 0-500-09317-2) (c) Copyright PWxyz, LLC. All rights reserved

Australian-born Hughes, art critic for Time and the author of 10 acclaimed books, begins his expert and passionate interpretation of the life and work of the seminal artist Goya with a dramatic account of how, during his recovery from a nearly fatal car crash, he was visited by the great painter in the twilight zone of his pain. This empathic connection with Goya, who suffered his own isolating and debilitating crisis in his mid-forties when a fierce illness left him deaf, enabled Hughes to write a remarkably vital, delectably discursive, and deeply affecting study of an artist whose unique and powerful work grows more significant with each passing year. Goya, Hughes writes, truly was a realist, one of the first and greatest, but he was also a sly and courageous social critic, creating indelible images of both earthy satire and epic tragedy. Declaring the prolific, sanguine and ironic Goya the last Old Master and the first Modernist, Hughes brings eighteenth- and nineteenth-century Madrid to dynamic life and insightfully dissects every aspect of Goya's ever-evolving paintings and etchings, indelible works that grew steadily darker, more disturbing, and increasingly radical in their indictment of injustice and violence. Hughes' profound appreciation for Goya's genius and immense humanity will inspire readers to look to Goya's magnificent, shocking, and clarifying works as to a polestar as we grapple with the inhumanity of our times. --Donna Seaman Copyright 2003 Booklist

Time's art critic and cultural pundit (A Jerk on One End, 1999, etc.) finally produces his decades-in-the-making consideration of the Spanish painter. Hughes had been "blocked for years," he admits, before a 1999 car crash in his native Australia landed him in the hospital for more than six months and gave him direct experience with the "fear, despair, and pain" that Francisco Goya (1746-1828) excelled in depicting. Despite opening on this personal note, the text overall is simply another demonstration of Hughes's always impressive ability to write about art for the general public without either pandering or putting on airs (American Visions, 1997, etc.). The prose is vigorous and opinionated--swipes at "the animal-rights faithful" and Hemingway's "kitsch writing" during a discussion of Goya's bullfighting etchings, for example--but no more so than usual for this writer. And the firmly expressed opinions don't convey a more private engagement with the material: exegeses of Goya's scathing series on The Disasters of War or his great painting of political martyrdom, The Third of May 1808, are intelligent, thorough, and involved without achieving that additional intimacy accessible only to an author more willing to sound vulnerable than Hughes is. We wouldn't miss this quality if the opening pages hadn't seemed to promise it; Goya smoothly blends art, cultural, and political history with biography to cogently capture its subject's wide-ranging genius, reminding us that the creator of such searing images of human cruelty, duplicity, and stupidity as the Caprichos etchings was also a perfectly contented, if slightly bored, painter of sedate royal portraits for three generations of Spanish monarchs. (The reactionary Fernando VII finally drove him into self-imposed exile in France in 1824.) For all Hughes's fluid exposition and astute character assessments, it remains a mystery how this "man reasonably at ease in the world" could cast such a cold eye on its horrors. A solid work of art history, though not the revelatory summing-up the author appears to have aspired to. (215 illustrations, 115 in color, color not seen) Copyright ©Kirkus Reviews, used with permission.
More book reviews at iDreamBooks.com