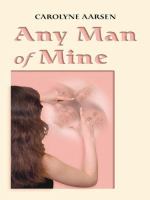 Any man of mine [text (large print)] / by Carolyn Aarsen.

Living with three brothers has taught me what I don't want in a husband. Guys who can only converse about farming, welding and hockey won't cut it. And those who prefer a rodeo to a symphony or dusty jeans to a nice suit are not for me. Unfortunately, my hometown is full of guys just like my brothers. So I've been planning to move to the city for a fresh start. But now I'm having second thoughts. There's a new man in town... a churchgoer who's cultured, wears suits and, most important, is nothing like my brothers.