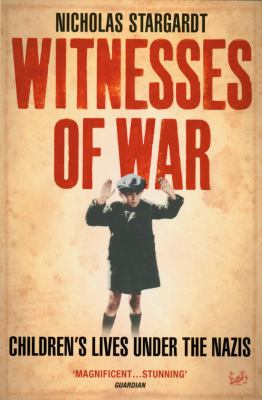 Witnesses of war : children's lives under the Nazis / Nicholas Stargardt.

"Witnesses of War is the first work to show how children experienced the Second World War under he Nazis. Children were often the victims in this most terrible of European conflicts, falling prey to bombing, mechanised warfare, starvation policies, mass flight and genocide. But children also became active participants, going out to smuggle food, ply the black market, and care for sick parents and siblings. As they absorbed the brutal new realities of German occupation, Polish boys played at being Gestapo interrogators, and Jewish children at being ghetto guards or the SS. Within days of Germany s own surrender, German children were playing at being Russian soldiers. As they imagined themselves in the roles of their all-powerful enemies, children expressed their hopes and fears, as well as their humiliation and envy. his is the first account of the Second World War which brings together the opposing perspectives and contrasting experiences of those drawn into the new colonial empire of the Th

The true victims of any war are children. Using archival sources and a vast bibliography, Stargardt (history, Magdelen Coll., Oxford) chronicles life under Nazi rule, which left over 13 million abandoned and orphaned children after the war. Stargardt divides this work into chapters following the rise, escalation, and defeat of Nazism, concentrating on how children (Jews, patients at mental hospitals, inmates in juvenile homes, "regular" Germans, and conquered nationalities) coped with this existence. He details the survival tactics used by children, including playing games, drawing, keeping diaries, and trading on the black market. He also convincingly disputes the idea that the German public was unaware of the abuses going on around them. This work extends Dorothy Macardle's Children of Europe: A Study of the Children of Liberated Countries by examining how these child survivors are coping with their memories in later life. Although other works discuss this issue, particularly Dan Bar-On's Legacy of Silence and Gerald Posner's Hitler's Children, Stargardt is the first to offer a comprehensive overview of this topic. Owing to the subject, the content of this book is frequently disturbing to read. Therefore specialists on this topic may be best prepared for it. The book is recommended for academic and large public libraries.-Maria C. Bagshaw, Lake Erie Coll., Painesville, OH (c) Copyright 2010. Library Journals LLC, a wholly owned subsidiary of Media Source, Inc. No redistribution permitted.

Handicapped German children taken from their families before WWII, girls of all nations raped by marauding soldiers, Jewish children shoved into ghettos: as Stargardt shows in this well-researched and horrific history, the lives of children were ravaged by Hitler's goals and the war he produced. Like Lynn Nicholas in her recent and also excellent Cruel World: The Children of Europe in the Nazi Web, Stargardt, a historian at Oxford, tells his story through the children's eyes using diaries and oral histories as well as other documentary sources. To be a child during the war, he notes, could be both easier and harder than it was to be an adult. Children often proved more resilient in overcoming physical and mental injuries. At the same time, they lacked the ability to directly express the pain that was haunting their dreams. Perhaps most unusual is Stargardt's illumination of how the Nazi regime affected German children, from those (who today would be called at-risk children) sent away to be "re-educated" to the idealized Hitler Youth sent to die in battle; it's a sharp and taut account of misery. 16 pages of b&w photos, 6 maps. Agent, Clare Alexander. (Jan. 20) (c) Copyright PWxyz, LLC. All rights reserved

First published in Great Britain in 2005, Stargardt's riveting account draws on original material from children's schoolwork, juvenile diaries, letters from evacuation camps, letters to fathers at the front, letters from reformatories and psychiatric asylums, children's artwork in the Jewish ghetto of Theresienstadt and German villages in the Black Forest, as well as adult accounts of children's games. The children include a Czech-Jewish boy in Theresienstadt and Auschwitz, a German teenager from East Prussia, two Jewish girls in the Warsaw ghetto, a German schoolgirl from a socialist family in Berlin, two teenage members of the Hitler Youth, and a Jewish boy in Lodz. Stargardt posits that as children's memories of Nazi Germany divided between those who remembered it as a time of normality and those who recalled it with fear and horror, the exact events they recollected mattered. He shows that at some point--as their parents broke down in the starving Jewish ghettos, or as they fled before the Red Army in the snows of 1945, or hid in cellars during bombing raids--many children shouldered premature responsibilities. Such dutifulness, Stargardt believes, tied them to their families, especially their mothers, long after they would normally have gone their own way. These touching stories provide a unique and important view of the Holocaust. With 16 pages of photographs and 60 pages of notes, a meticulously documented study. --George Cohen Copyright 2005 Booklist

An absorbing study of Nazi-era childhood, drawing on diaries, interviews and other primary sources. The Third Reich was founded on the premise that the German "race" could and would be purged of putatively unhealthy elements--the mentally and physically disabled, the antinomian, the "mongrel." From the start, as Stargardt (History/Oxford Univ.) notes, the regime executed children defined as unfit, though it took pains to disguise its program of medical murder. Meanwhile, the Jewish children who remained in Germany--Stargardt observes that more than 80 percent had emigrated by 1939--lived in a liminal world; one recalls that the children on his own block would not play with him, but all he had to do was go to a neighborhood where he was unknown and he "was able to enjoy the anonymity of the streets and join other Berlin children in their games." Some children mounted rebellions in the face of totalitarianism; Stargardt recounts a swing festival inexplicably staged in Hamburg in 1940, in which 500 adolescents clad in English fashions spoke English and French, to the horror of the Gestapo. In general, of course, life for children was as horrible as it was for adults. There is no room for false sentimentality in Stargardt's pages; he resists the notion that suffering is necessarily ennobling, particularly when the suffering has been experienced by the children of the aggressors, who become "the objects rather than the subjects of history." And his account is full of moral nuance, as he explores the world of a teenage kapo in the Terezin concentration camp, of a child assigned to guard women awaiting execution and other children who carefully noted where they buried their Hitler Youth badges when the Allies arrived. Fascinating and often unsettling; an illuminating companion to firsthand accounts such as Irmgard Hunt's On Hitler's Mountain and The Diary of Anne Frank. Copyright ©Kirkus Reviews, used with permission.
More book reviews at iDreamBooks.com