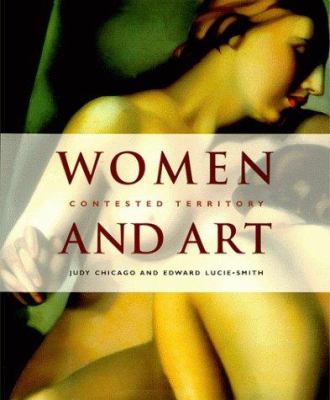 Contents:
The divine -- The heroic -- Maternity -- Daily life -- Asking for it? -- Casting couch and brothel -- I paint, therefore I am -- Body as battleground -- Household vanities -- Exploring identities.
Tags from this library: No tags from this library for this title. Log in to add tags.

While men have long held a monopoly on artistic "greatness, " this groundbreaking book analyzes images of women by both male and female artists in a triumphant celebration of the feminine throughout all of art history.

The divine -- The heroic -- Maternity -- Daily life -- Asking for it? -- Casting couch and brothel -- I paint, therefore I am -- Body as battleground -- Household vanities -- Exploring identities.

This is a curiously interesting hybrid with two running commentaries per page. The central space is reserved for a somewhat traditional art historical text on women artists and images of women in art by British art critic/art historian Lucie-Smith. The rest is filled with the writings of one of the most opinionated and surely the most famous U.S.-based feminist artist, Chicago, creator of The Dinner Party. The collaboration is certainly eye-catching, but, despite 200 beautiful color plates, this is no coffee-table decoration. It seems compiled to capture the attention of any browsing reader of college age and above. Many of the ten chapters might startle the average readerÄthey're explicit about gender issues, bodily functions, and other oddities that are now a part of contemporary art. For serious academic libraries with feminist and graduate collections.ÄMary Hamel-Schwulst, Towson Univ., MD (c) Copyright 2010. Library Journals LLC, a wholly owned subsidiary of Media Source, Inc. No redistribution permitted.

On the surface this appears as typical Lucie-Smith fare: rapidly produced, brilliantly illustrated, and accompanied by a somewhat superficial text. New is the addition of "co-author" Chicago, whose introduction, postscript, and signed dialogue boxes throughout give new meaning to the phrase "running commentary." Art historian Lucie-Smith writes a fluid historical treatment, perhaps stunted by the book's rigid format--mostly single-page sections introduced by trivializing, space-wasting subtitles. Artist Chicago's portion mixes self-aggrandizing statements with unnecessary digressions. Her personal bitterness seems unlikely to promote the book's mission of reaching a wide audience of women "who will draw strength from it" and men who will "find some things in it they really ought to know." Commendable, however, is the integration of works by both genders. The juxtaposition of images throughout is thought-provoking and visually appealing, although some will be surprised at the absence of Georgia O'Keeffe, Remedios Varo, and others. Though the publisher likely dictated the absence of bibliography or sources, unforgivable is the incredibly brief treatment given to works by contemporary women artists other than Chicago herself. Recommended chiefly for the illustrations. General readers. E. K. Menon; Minnesota State University, Mankato

The collaboration between artist Chicago and art historian Lucie-Smith is as fruitful as it is unexpected. Their goal was to explore the history of women in art as both subject and creator, and the result is an animated and enlightening dialogue. Chicago writes in the first person, recounting her experience as a young woman artist searching for her progenitors only to find paintings by men depicting women "content to just lie around being gazed at," decidedly not the role she hoped to play. While Chicago shares her life story and draws on her decades-long study of women artists, Lucie-Smith writes the fluent, well-informed commentary he is known for, balancing formal concerns with insightful considerations of the moral dilemmas raised by feminist historians. Their electrifying discussion is anchored to powerful images of women found in works of art both historical and contemporary and by both male and female artists. Chicago and Lucie-Smith's piercing investigation will undoubtedly change perceptions of art and of women. --Donna Seaman

A thematic overview of women's art that lumps disparate work together in gross categories based on archetype, stereotype, theme, and body part. Although artist Chicago and art historian Lucie-Smith sought to create a book that would delineate the contested terrain between women and art, their collaborative effort only blurs it with clich and generalization. From the opening chapter, which begins with the assertion that goddess imagery has ``seized the imagination of many women and been a continuing source of energy within feminism,'' they celebrate overlooked art based on its suitability to their ideological construct: that male artists, critics, and curators have overlooked and suppressed women's work, which deserves to be seen and addressed. True, but no sustainable argument can emerge from such an a critical approach; all that remains is for the authors to provide a series of examples, which they do. Those examples break down into an unfortunate series of stock types, from the aforementioned goddesses to warrior women, madonnas, whores, martyrs, mothers, and daughters. And everywhere'strategically placed throughout the text'are images of Chicago's own work. Could she merely be seeking to recontextualize herself in the feminist canon (that of Frieda Kahlo, Ana Mendieta, Cindy Sherman, even Mary Cassatt)? In light of the tremendous scholarship and theoretical insight that have been brought to bear on women's art over the past ten years'and the riveting arguments about identity politics that have followed'the authors' lack of critical sophistication is painful to behold. Even worse, many of the contemporary works pictured are shockingly banal'chosen more for their subject matter than their visual, intellectual, or conceptual resonance. Chicago, apparently, is still very much in the grip of essential feminism, and her book suffers for it. As a critical text, Women and Art falls victim to old-style celebratory feminism, lauding without judgment or incisive, original thought.
More book reviews at iDreamBooks.com