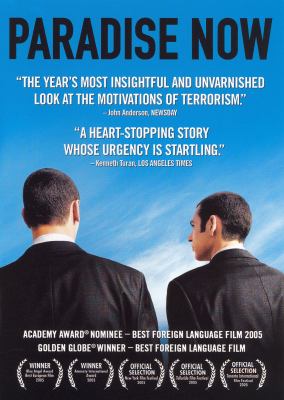 | Arabic language materialsGenre/Form: Feature films. | Foreign language films.
Production Credits: Director of photography, Antoine Heberle ; editor, Sander Vos
Awards: Academy Award Nominee - Foreign Language Film 2006. Winner Foreign Language Film Golden Globe Awards 2006.Cast: Kais Nashef, Ali Suliman, Lubna Azabal, Amer Hlehel, Hiam Abbass, Ashraf Barhoum.Summary: The story of what may be the last 48 hours in the lives of two Palestinian men who have been recruited as suicide bombers. When they are intercepted at the Israeli border, a young woman who discovers their plan causes them to reconsider their actions.
Tags from this library: No tags from this library for this title. Log in to add tags.
Audiovisual profile: Click to open in new window

Said (Kais Nashef) is a young Palestinian living in Nablus, and working as a mechanic. He gets his friend Khaled (Ali Suliman) a job, but the hot-tempered and impulsive Khaled quickly loses it. Suha (Lubna Azabal), a pretty, well-traveled young woman and the daughter of a well-known "martyr," brings her car in to be fixed, and flirts with Said. He's clearly interested in her, so much so that he continues to think of her when he's approached later that day by Jamal (Amer Hlehel), who tells him that he's been selected for an important mission, a suicide bombing in Tel Aviv, and that Khaled will be joining him, as they had requested. That night, Jamal stays with Said at his mother's (Hiam Abbass) house, while another man stays with Khaled. Said sneaks off during the night to bring Suha her car keys, and has a brief discussion with her about her father's death, and what options the Palestinians have in their dealings with Israel. Said doesn't tell her the real reason for his visit: he's saying goodbye. The next morning, as scheduled, Said and Khaled are given neat haircuts and suits. They each make a video explaining to their families why they've chosen this path. Explosives are strapped on, and they are warned that trying to remove the belts themselves will result in detonation. When they're brought to a hole in the fence surrounding Nablus, they are intercepted by Israeli troops. Khaled and Said flee, and get separated. Said is left on his own. Paradise Now was co-written and directed by Hany Abu-Assad (Rana's Wedding, Ford Transit). A hit on the festival circuit, it was selected for inclusion in the 2005 New York Film Festival by the Film Society of Lincoln Center. ~ Josh Ralske, Rovi

Videodisc release of the 2005 motion picture.

The story of what may be the last 48 hours in the lives of two Palestinian men who have been recruited as suicide bombers. When they are intercepted at the Israeli border, a young woman who discovers their plan causes them to reconsider their actions.

In Arabic with optional English subtitles.