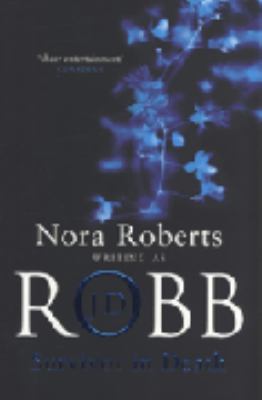 Murder was always an insult, and had been since the first human hand had smashed a stone into the first human skull. But the murder, bloody and brutal, of an entire family in their own home, in there own beds, was a different form of evil.' On the surface Keelie and Grant Swisher seem unlikely targets for an assassin; an average couple living in a nice neighbourhood and working hard to raise their two kids. But when Eve Dallas is called to a multiple homicide at the Swisher family home, she discovers a blood-bath. There are five dead - including two children - in what seems to be a professional hit. The killers breached an elaborate security system, slashed the throat of each victim while they slept; and were in and out of the house in less than ten minutes. In fact they made only one mistake. They left a survivor. Nine-year-old Nixie Swisher's sudden urge for a midnight snack may just have saved her life. While her parents, brother and best-friend lay in their beds, oblivious to the threat, Nixie was downstairs in the kitchen getting a soda and saw far too much. But as Nixie is the only survivor of a seemingly motiveless attack, Eve knows that her priority is to keep her safe. Offering her a temporary refuge is easy, but dealing with the emotional needs of a nine-year-old girl who has lost everything isn't. Eve can at least promise Nixie justice, but she's chasing professionals who don't like leaving loose ends. And leaving Nixie Swisher alive is one loose end too many

In the 20th fine volume of Roberts's futuristic mystery franchise, police lieutenant Eve Dallas is called in when lawyer Grant Swisher and his family are massacred with eerie skillfulness on the Upper West Side. The only survivor is 10-year-old Nixie, who evades-and witnesses-the killers as she creeps down to the kitchen for a midnight snack. Despite the painful memories of her own childhood that Nixie's presence calls up, Eve decides to hide the girl in the high-tech mansion she shares with her husband, billionaire businessman Roarke. With help from Roarke; her faithful sidekick, Peabody; and others, Eve discovers the existence of a shadowy former military operative with a grudge against Swisher-the lawyer helped the operative's battered wife divorce him right before she disappeared. The relatively early disclosure of the villain's identity and the dearth of other viable suspects dulls the suspense in the first half of the book, but tension escalates toward an absorbing denouement as a trap Eve sets for her target ends up with Nixie as its unintentional bait. Throughout, the series' colorful supporting cast and Eve's prickly personality-smartly showcased in her power struggles with everything from space-age vending machines to her own past-remain as vividly appealing as ever. Agent, Amy Berkower. (Jan.) (c) Copyright PWxyz, LLC. All rights reserved

One witness, two killers, five murders. Eve Dallas investigates. Trouble is, the witness is only nine and didn't see much in the dark. But it's clear that Nixie Swisher was supposed to die right along with her mother, father, brother, and housekeeper. Thanks to her late-night craving for an Orange Fizzy, Nixie escaped, though her best friend got her throat cut with chilling precision. All Eve (Visions in Death, p. 601) can do is step over the bodies and start connecting the dots with every security gizmo and techno-toy available in 2059 New York. But nothing adds up. Grant Swisher was a do-good lawyer who got battered women out of life-threatening relationships. Keelie Swisher was a nutritionist. Who'd murder a sweet-faced vitamin pusher? The housekeeper, Inge Snood, happened to be in the wrong place--her own bed--at the wrong time. The kids--were just kids. But Eve can't help seeing a reflection of her own horrific childhood in Nixie's terrified eyes, and she wants to save this kid. She pulls rank on Meredith Norman, the social worker from Child Protection Services, so Nixie can stay with her and billionaire husband Roark for a while. Meredith is required to put the kid in protective custody, but Eve won't let that happen. Then a few things begin to add up. Meredith goes missing, and when her torture-marked corpse is found and the two cops guarding the gates are slain as well, the questions fly thick and fast (and the sentences get even shorter). Are cold-blooded operatives for covert government agencies running amok and killing for hire? Are evil brutes, separated at birth but with a shared thirst for blood, carrying out vendettas either for the hell of it or following a hellish ideology of their own? Eve and Roark find a link to someone bent on vengeance and follow a trail to heartland America and back to New York. And, yup, they kick a lot of butt. Tough-talking thriller with a matchless pace. Copyright ©Kirkus Reviews, used with permission.
More book reviews at iDreamBooks.com