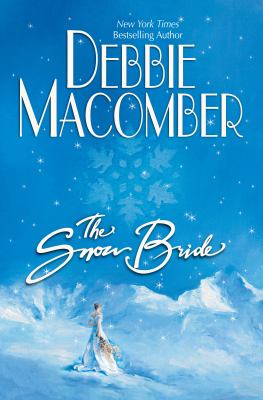 The Snow Bride by Debbie Macomber released on Sep 30, 2003 is available now for purchase.

On her way to Alaska to meet Dalton Gray, a man she has only encountered via the Internet, Jenna Campbell finds herself kidnapped by Reid Jamison, her rough-and-ready seatmate on the plane to Fairbanks, and spirited away to his cabin in the remote hamlet of Snowbound. Of course, Reid's intentions are totally honorable; Dalton has a slimy reputation, and Reid isn't about to let any woman walk unknowingly into Dalton's grasp-even if she is stubborn, uppity, and prissy. But when a snowstorm temporarily isolates the town, the dynamics between Reid and Jenna change dramatically-and then Dalton, Jenna's mom, and, eventually, Jenna's old boss show up-and the fun begins. Graced with an abundance of likable, interesting characters and a well-paced plot, this funny, heartwarming holiday romance is perfect fireside reading. Macomber is a New York Times best-selling author and has written numerous sweet contemporary and mainstream romances. She lives in Port Orchard, WA. (c) Copyright 2010. Library Journals LLC, a wholly owned subsidiary of Media Source, Inc. No redistribution permitted.

Prolific Macomber puts a new twist on the smalltown romance with this lightweight Christmas caper, which takes place in the one-woman town of Snowbound, Alaska. Despite having a population of only seven, Snowbound has a cafe, a grocery, an airstrip and, as 31-year-old Los Angeles native Jenna Campbell soon learns, several bighearted bachelors. Having spent six years mooning after her workaholic boss, Brad Fulton, who barely knows she's alive, executive assistant Jenna is now ready to seek snowier pastures. She quits her job and heads to Beesley, Ala., to meet Dalton Gray, a poetic outdoorsman who has been corresponding with her via e-mail. But when Dalton doesn't arrive at the airport to greet her, she hires Reid Jamison, her annoying seatmate, to fly her to Beesley. Reid knows Dalton and has good reason to despise him, so he changes directions and whisks Jenna away to his home in Snowbound. Meanwhile, Brad decides he can't function without Jenna and vows to do anything (even offer marriage) to get her back, and Dalton frantically searches for her in the local bars. Add Jenna's flighty, five-times-married-and-divorced mother, Chloe, to the mix, and the madcap race is on for who will win Jenna's heart. Macomber's characters never evolve beyond their stock roles, and the romance between Reid and the exasperatingly prissy Jenna is superficial. Dialogue-heavy and virtually devoid of the kind of descriptive details that would wrap readers up in the book's snowy setting, this tall tale has all the intensity and substance of a fall flurry. Still, it's a fast, frothy fantasy for those looking to add some romance to their holidays. (Oct.) (c) Copyright PWxyz, LLC. All rights reserved

Jenna is used to taking care of everyone, including her filthy-rich boss, Brad, so when she meets a man online who wants to take care of her, she abruptly quits her job and sets off for Alaska. But when she arrives, Dalton isn't anywhere to be found, so resourceful Jenna hires a pilot named Reid to fly her to him. But Reid knows that Dalton is a womanizer, so he brings Jenna to his home in Snowbound instead. Jenna is beyond angry at being kidnapped, but when a snowstorm forces her to spend days on end with Reid, she realizes that for some reason she likes his caveman ways and passive plays (he seems to be attracted to her but won't act on it). But just as the two are on the verge of expressing their feelings, Dalton and Brad arrive. This is an amusing and promising setup, but Macomber fails to make the most of it, which may not deter her many followers. --Megan Kalan Copyright 2003 Booklist
More book reviews at iDreamBooks.com