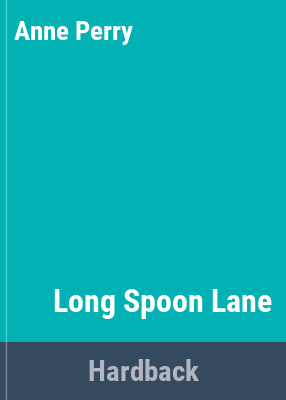 Early one summer morning, two bombs explode in an East London street. Warned in advance of an anarchist attack, Thomas Pitt arrives in time to chase the bombers down to run-down tenement in Long Spoon Lane. There, two men are arrested and one shot dead - but who and where is the killer?

Carnage comes early in Perry's engrossing Victorian historical, the follow-up to Seven Dials (2003), when Special Branch investigator Thomas Pitt is summoned in the middle of the night to the aftermath of a bombing, the work of unknown anarchists intent on wreaking havoc in London in revenge for high-level police corruption. The chase leads to the group's lair in an abandoned building along grimy Long Spoon Lane, where the body of Magnus Landsborough, son of a well-connected lord, raises disturbing questions about both the young man's association with the underground cell and police procedures to combat terrorists. Pitt and fellow detective Victor Narraway soon find themselves up against a powerful secret society known as the Inner Circle. True-to-life parliamentary debate ensues over how much power police should be granted to quash the anarchist threat to Queen and country. The action slows when myriad characters, including wives, servants and politicians, hold excessively detailed discussions of the case, but the pace picks up with a spirited pursuit through London and across the Thames. Perry manages to paint a convincing historical backdrop with echoes of modern-day fears of urban terrorism. Agent, Donald Maass. 12-city author tour. (On sale Mar. 29) (c) Copyright PWxyz, LLC. All rights reserved

Greed, revenge, loyalty, justice, and a thirst for power each play a role in the latest Charlotte and Thomas Pitt adventure, which, like its predecessors, draws much of its intensity from nineteenth-century London's social and political climate. The city is in an uproar. Anarchists have set off a bomb to protest police shakedowns in a working-class neighborhood, and one of their own, the son of a Parliament member, has been shot to death. Finding out who killed the young radical and why falls to Thomas, now working for Special Branch, but to succeed he must join forces with the ruthless Charles Voisey; his old Bow Street friend Sergeant Tellman; and wise, socially connected Aunt Vespasia. Arguments about broadening police powers as a reaction to terrorist activity can't help but strike a chord with American readers, who will appreciate the cleverly orchestrated political machinations as much as the personal agendas--both of which come fully into play when it comes to solving the mystery. --Stephanie Zvirin Copyright 2005 Booklist

Taking a break from her WWI fiction (Shoulder the Sky, 2004, etc.), Perry exposes the political machinations behind a Victorian-era Patriot Act. Thomas Pitt, whose troublesome independence has bounced him from Bow Street to the Special Branch, is too late to prevent a pair of bombings in Myrdle Street or save the life of Magnus Landsborough, an aristocrat anarchist shot in the back. The police claim Magnus must have been killed by his friends; the anarchists they arrest indignantly respond that only the police wanted him dead. But the real story lies elsewhere. Several well-known antiterrorists led by influential newspaper editor (and Magnus's uncle) Edward Denoon, a firebrand M.P. named Tanqueray, and Supt. Wetron, secret chief of the radical republican Inner Circle, are pushing a parliamentary bill to arm the police and give them extraordinary powers to search and question citizens. The possibility that the force behind the latest anarchist outrage may be the highly placed Wetron, out to consolidate his own power, forces Pitt to accommodations with some strange bedfellows--notably his old nemesis Sir Charles Voisey, Wetron's predecessor as head of the Inner Circle (Southampton Row, 201, etc.)--and allows Perry to give her hero and his allies some stirring speeches against excessive government powers before the crime is brought home, rather anticlimactically, to the usual domestic intrigue. The period setting allows both some thoughtful debate on a difficult problem and a solution more reassuring than anything you'll find in tomorrow's papers. Copyright ©Kirkus Reviews, used with permission.
More book reviews at iDreamBooks.com