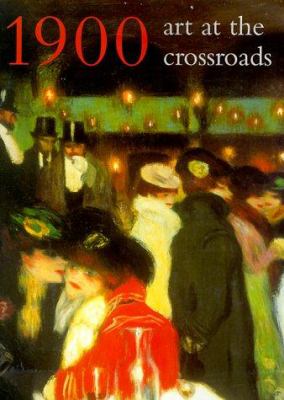 Provides an eye-opening look at artists in this watershed year.

An exhibition organized by The Royal Academy of Arts, London, and the Solomon R. Guggenheim Museum, New York, 1900: Art at the Crossroads examines the diverse range of artworks produced during this period. While artists such as Czanne, Degas, Rodin, and Klimt were well known by the turn of the century, lesser-known artists were making art that equally reflected the stylistic and social concerns of this epoch. In his essay, the Guggenheim's Rosenblum explores various related themes that are woven within the paintings and sculpture. These include subjects such as fantasy vs. reality, the representation of women, and the new psychological probity. The Royal Academy's Stevens shows how the Exposition Universelle of 1900 in Paris and the issue of nationalism as well as the genesis of international styles in the art of this period foreshadowed developments and the rest of the 20th century. The catalog portion of this book is illustrated with color plates of all the works in the exhibition and divided by theme, such as the city, landscape, portraits, bathers and nudes, and religion. This handsome volume is recommended for general art collections as well as academic and art libraries.--Sandra Rothenberg, Framingham State Coll., MA (c) Copyright 2010. Library Journals LLC, a wholly owned subsidiary of Media Source, Inc. No redistribution permitted.

Typical of its genre, the Paris Exposition of 1900 was the gigantic smorgasbord of the technological, scientific, and cultural specimens that the public had come to expect of such enterprises. The present publication catalogs an exhibition recalling the artistic milieu of the day, updated to include some notable omissions from the offerings at the fair. In his essay, Rosenblum (New York Univ.) reflects on the unsettling tensions and contradictions of the era, which even a century later remain unresolved. Stevens (Royal Academy of Arts, London) reconstructs the setting of the fair and recalls its special attractions. Dumas catalogs the contents of the current exhibition in a series of shorter reviews, comparing and contrasting the approaches of contemporaneous artists to such traditional subjects as landscape, portraiture, social scenes, and religious imagery. Biographies and other helpful documentary material follow. All this is copiously illustrated with images of superior quality. Some of the juxtapositions are rather surprising and stimulating. But Rosenblum's question as to whether the viewer of 1900 was confronted with an intelligible vision of either "Twilight or Dawn" perhaps remains moot. Naive assumptions about "progress" in the arts are, once again, tested. All levels. ; emeritus, Amherst College

Held in 1900, the Paris Exposition Universelle was an immense gathering of artwork from Western Europe, Scandinavia, Russia, the U.S., and places as far away as Japan and Australia. For Rosenblum, professor of fine arts at New York University, and his coauthors, curator Maryanne Stevens and art historian Ann Dumas, the show serves as a wellspring for a fresh analysis of the clash between the old and the new that shaped the art of that transitional era. They define a number of pictorial themes to bring order to a dazzling array of powerful, all-but-forgotten paintings and sculptures, some 300 in number; they then discuss the ways in which political upheaval, industrialization, and a new awareness of the nature of the unconscious, thanks to Freud, inspired such dramatic images and styles. These innovative interpretations and the brief but insightful artist biographies that follow are enlightening, and the reproductions, many published for the first time, are glorious. This unique and eye-opening volume greatly expands commonly held assumptions about the art of the turn of the nineteenth century, delineates the symbiotic relationship between artists and society, and reveals how art transcends ethnicity and nationalism to express universal feelings and concerns. --Donna Seaman
More book reviews at iDreamBooks.com