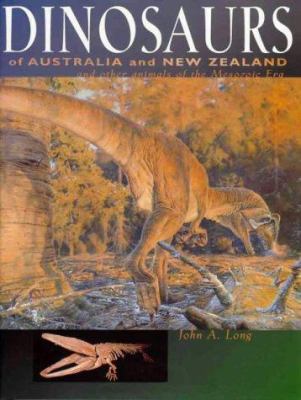 Dinosaurs of Australia and New Zealand and other animals of the Mesozoic era / John A. Long.

A reference on Australia and New Zealand's Mesozoic animals, including the dinosaurs, this book contains coverage of the 115-million year old Austribosphenos nyktos, the tiny shrew-like mammal whose discovery has challenged theories on the evolution of mammals.

Published simultaneously in the U.S.

Title notwithstanding, this volume is basically an introduction to the vertebrate paleontology of the Mesozoic era of Australia and New Zealand. The actual number of true dinosaur fossils found is relatively small, in part a reflection on the fact that few paleontologists work in this vast area. For some obscure reason each chapter is introduced by several pages with a deep purple background, making for difficult reading. Once this obstacle is overcome, the text reads quite well and is both ideally illustrated and ideally mapped. Introductory chapters deal with fossils in general and the taxonomy of those reptiles popularly known as dinosaurs. Only one chapter deals specifically with dinosaur discoveries; the remainder pertain to other taxa and the localities where specimens were located. The profuse illustrations and taxonomic diagrams are the highlights of the volume. Considering all this, the volume is quite reasonably priced. An excellent introduction to the vertebrate paleontology of Australia and New Zealand, with references to every significant study in the area. A suitable guidebook. General readers; undergraduates; two-year technical program students. G. Nicholas; Manhattan College

Dinomania afflicts five-and fifty-year-olds alike. But unlike many scientific subjects, the study of the terrible lizards is accessible to enthusiasts spanning the ages, aided by such visually colorful works as DeCourten and Long's. Visitors to Dinosaur National Monument are only scratching the surface of what Utah offers in extinct charismatic fauna, because those animals tramped all over Utah, not just in a federally designated preserve, and left millions of footprints, fossilized bones, and gastroliths (rocks from dino gizzards) that continually weather to the surface. The abundance stems from the geologic upheaval of the Mesozoic age, when "all hell broke loose," as paleontologist DeCourten writes. During the Mesozoic, the Utah area drifted northward from the equator, through the dry horse latitudes, then farther north still into wetter climes. The dinosaurs, consequently, evolved in radically different environments, the geologic record of which DeCourten ably describes, supported by photos of Utah's buttes and canyons. But paintings by Carol Brest Van Kempen more viscerally capture the imagination. There are 22 paintings, which crown this capable introduction to the age of dinos in general, not just parochially those of Utah. Long's work also sports eyecatching paintings, and its quality, too, extends beyond mere eye candy. The reason lies in Long's successful appeal to both expert paleontologists and novitiates. Long, a museum curator in Perth, balances what is popular (pictures of toothy, menacing skulls) with what is basic (precise taxonomic description). The two levels of detail coexist thanks to an effective graphic presentation that enhances the text with photographs of dig sites, bones and clawprints, and reconstructions of the dinosaurs. This look supports the substance of Australia's status, rivaled by the American West, as the world's dinotopia. The dry environments promote quick discovery of fossils eroding out of Mesozoic strata, and Long's descriptions of a century's worth of Aussie finds are worth most science collection's consideration. --Gilbert Taylor
More book reviews at iDreamBooks.com