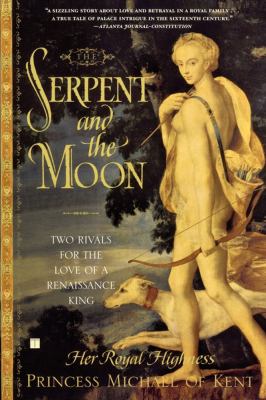 The serpent and the moon : two rivals for the love of a renassaince king / Her Royal Highness Princess Michael of Kent.

By: Michael, of Kent, Princess

Set against the stunning backdrop of Renaissance France, The Serpent and the Moon is a true story of love, war, intrigue, betrayal, and persecution. At its heart is one of the world's greatest love stories: the lifelong devotion of King Henri II of France to Diane de Poitiers, a beautiful aristocrat who was nineteen years older than her lover.
At age fourteen, Henri was married to fourteen-year-old Catherine de' Medici, an unattractive but extremely wealthy heiress who was to bring half of Italy to France as her dowry. When Catherine met Henri on her wedding day, she fell instantly in love, but Henri could see no one but the beautiful Diane. When Henri eventually became king, he and Diane ruled France as one. Meanwhile, Catherine took as her secret motto the words "Hate and Wait" and lived for the day Diane would die and she could win Henri's love and rule by his side. Fate had another plan.
Her Royal Highness Princess Michael of Kent, herself a descendant of both Catherine and Diane, imbues this seldom-told story with an insider's grasp of royal life. The Serpent and the Moon is a fascinating love story as well as a richly woven history of an extraordinary time.