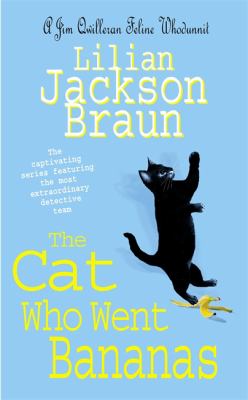 willeran - a prize-winning reporter with a nose for crime. Koko - a Siamese cat with extraordinary talents and a flair for mystery. Yum Yum - a loveable Siamese adored by her two male companions. The most unlikely, most unusual, most delightful team in detective fiction are back to solve their 27th Cat Who... mystery

This 27th Cat Who book finally knocks the series off track. Residents of Pickaxe are excited about a local production of The Importance of Being Earnest, but the play shuts down suddenly after one of its actors dies in a car accident. The circumstances of the accident are suspicious, there are allusions to an unsolved shooting years before--and the lead actor is a new resident with a shady past. All the familiar ingredients for a nice mystery are in place, and, as usual, Qwilleran's mustache twitches ominously and Koko howls at key moments. However, nothing more happens. No one investigates the deaths, no evidence of foul play surfaces, the actor with the shady past dies during an act of heroism, and the book suddenly ends. What's left is a cozy with no mystery. George Guidall's warm, familiar voice lends strength to the weak plot. Only Braun's most devoted fans will enjoy this, but libraries should acquire it as many listeners will want to borrow the book to avoid buying it.--R. Kent Rasmussen, Thousand Oaks, CA (c) Copyright 2010. Library Journals LLC, a wholly owned subsidiary of Media Source, Inc. No redistribution permitted. All rights reserved.

Bestseller Braun's formulaic 27th Cat Who... mystery (after 2004's The Cat Who Talked Turkey) lacks the charm of earlier adventures starring Siamese sleuths Koko and Yum Yum. In Pickax City, "400 miles north of everywhere," Jim Qwilleran, the semiretired gentleman columnist for the Moosehead County Something, is content to court longtime gal pal Polly Duncan while overseeing his philanthropic Klingenschoen Fund, which is bankrolling the Pirate's Chest, a new bookstore built to replace an old landmark. The arrival of talented thespian Alden Wade, a handsome widower who's to play Jack Worthing in a local production of The Importance of Being Earnest, threatens to enliven the proceedings and add tension to Qwill and Polly's peculiar, passionless relationship, until Alden's sudden marriage to the local Hibbard House heiress. Preparations for the Wilde play's opening and references to the Hibbard House history that Qwill is writing don't have much to do with the unsolved murder of Alden's first wife via a sniper's bullet. Once noted for its fine style, great characterizations and clever cat crime-solving, this cozy series has become a shadow of its former self. Agent, Lynda Gregory and Merry Pantano at Blanche C. Gregory. (Jan. 3) (c) Copyright PWxyz, LLC. All rights reserved

After 25 Cat Who adventures, do the plots matter anymore? Not really. In fact, compelling plots have never been the hallmark of this series. What keeps readers flocking back to Braun's books is her stellar cast of characters, led by the magnanimous Jim Qwilleran, former big-city journalist relocated to Moose County, and his feline partners, Koko and Yum Yum. This time Qwill's lady friend, Polly, has left her library job to open a bookstore, and her busy schedule is putting a severe crimp in the couple's social life. A handsome newcomer, Alden Wade, has come to town and is working for Polly, causing Qwill to do some jealous huffing into his glorious moustache. When Alden marries a well-off older lady, the locals suspect fortune hunting. Some of the mystery is never resolved, but it hardly matters. Faithful Braun readers feel right at home in Moose County, and its citizens--furry and otherwise--are just like family. --Jenny McLarin Copyright 2005 Booklist

Jim Qwilleran, columnist for the Moose County Something and caretaker of sleuthing cats Koko and Yum Yum (The Cat Who Brought Down The House, 2003, etc.), takes on amateur theater, valuable old books, and an ugly landmark. The Pickax theater club is in the throes of presenting The Importance of Being Earnest, starring newcomer Alden Wade, when Ronnie Dickson, playing Algernon, dies in a car accident, under the influence of drugs. But everyone who knew Ronnie, including his old friend Alden Wade, knew he didn't do drugs. Qwill does his wondering about Ronnie's death on his own, since his erstwhile companion Polly Duncan is preoccupied with the opening of the Pirate's Chest, her new bookstore. Seeking someone to appreciate his moustache and his wit, he cultivates Violet Hibbard, mistress of the historic but ugly Hibbard House. Violet, however, has her eyes on another eligible bachelor. Meanwhile, some valuable books are stolen out from under the nose of the new bookstore's "bibliocat." As the case meanders to its climax, Qwill gives a slide show, serves drinks to various friends and neighbors, and writes columns (the texts as usual appearing in the novel for the edification of the faithful). Koko's clues this time take the form of banana peels that, mercifully, Qwill figures out before he breaks his neck. Fans will go bananas; others may go Wilde. Copyright ©Kirkus Reviews, used with permission.
More book reviews at iDreamBooks.com