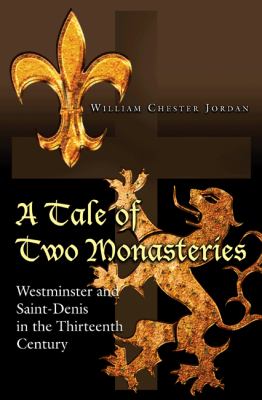 A tale of two monasteries : Westminster and Saint-Denis in the thirteenth century / William Chester Jordan.

DDC classification:
Contents:
England and France in the early thirteenth century -- Two great monasteries and two young men -- The Treaty of Paris -- The best of times, the worst of times -- A monumental rivalry -- Two royal successions -- The abbeys in the new regimes -- Diplomacy and governance -- Epilogue.
Tags from this library: No tags from this library for this title. Log in to add tags.

A Tale of Two Monasteries takes an unprecedented look at one of the great rivalries of the Middle Ages and offers it as a revealing lens through which to view the intertwined histories of medieval England and France. This is the first book to systematically compare Westminster Abbey and the abbey of Saint-Denis--two of the most important ecclesiastical institutions of the thirteenth century--and to do so through the lives and competing careers of the two men who ruled them, Richard de Ware of Westminster and Mathieu de Vendôme of Saint-Denis.


Esteemed historian William Jordan weaves a breathtaking narrative of the social, cultural, and political history of the period. It was an age of rebellion and crusades, of artistic and architectural innovation, of unprecedented political reform, and of frustrating international diplomacy--and Richard and Mathieu, in one way or another, played important roles in all these developments. Jordan traces their rise from obscure backgrounds to the highest ranks of political authority, Abbot Richard becoming royal treasurer of England, and Abbot Mathieu twice serving as a regent of France during the crusades. By enabling us to understand the complex relationships the abbots and their rival institutions shared with each other and with the kings and social networks that supported and exploited them, A Tale of Two Monasteries paints a vivid portrait of medieval society and politics, and of the ambitious men who influenced them so profoundly.

England and France in the early thirteenth century -- Two great monasteries and two young men -- The Treaty of Paris -- The best of times, the worst of times -- A monumental rivalry -- Two royal successions -- The abbeys in the new regimes -- Diplomacy and governance -- Epilogue.

In this tidy comparative study of two of the most important ecclesiastical institutions of the Middle Ages, Jordan (Princeton) uses the monasteries and the men chosen to govern them in 1258 as an entry into relations between 13th-century England and France. He finds many similarities both between the monasteries and between Richard de Ware and Mathieu de Vendome, the men who headed them. Both monasteries were Benedictine, under the jurisdiction of the Holy See, and under the patronage and protection of their respective monarchies. The abbots' skills and loyalty to their kings resulted in high positions in their states, Richard as royal treasurer and Mathieu as regent. Jordan emphasizes the close and strongly competitive nature of relations between the two kingdoms and their respective monasteries amid significant changes in each government. Both monasteries became "repositories of the national patrimony" and "center[s] of the cult of monarchy" (p. 216), embodying each kingdom's "emerging national spirit" (p. 220). With attention to detail and the complexity of historical context, Jordan offers an original study of the effects of relations between the two kingdoms on the political, economic, and cultural life of each realm. Summing Up: Recommended. Upper-division undergraduates and above. J. Harrie California State University, Bakersfield
More book reviews at iDreamBooks.com