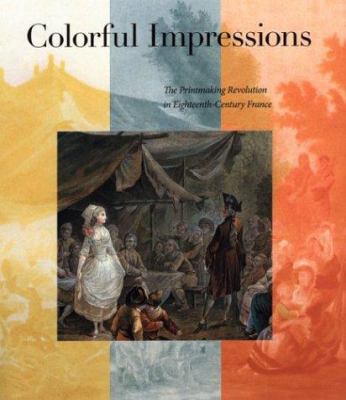 One of the most glorious and creative periods in the history of colour printmaking occurred in 18th-century France. Newly invented engraving and etching techniques were combined with new ways of printing a single image from multiple plates, allowing printmakers to replicate a broad palette of colours using variants of only four: blue, red, yellow and black. The resulting prints were so believable that they were often called printed paintings and engraved drawings. familiar to scholars and collectors, but the artists whose compositions they copied include some of the greatest talents of the period - Watteau, Boucher, Fragonard and Boilly all feature, along with many others. is a useful addition to the literature on this topic. Reproducing all the featured prints in colour, the images are supported by a range of scholarly essays.

The demand for accurate copies of two-dimensional fine art was satisfied in 18th-century France by masters of color intaglio printmaking-the transfer of ink onto paper from cut and textured metal plates. The only book currently available that focuses on these artists (among them Jakob Christoffel Le Blon, Louis-Marin Bonnet, and Jacques-Fabien Gautier Dagoty), this work accompanies a recent exhibition at the National Gallery of Art in Washington, DC. It presents 181 color reproductions as well as x-rays of many of the watermarks pressed into the paper of the prints. Grasselli, curator of old master drawings at the National Gallery, provides background information on each of the prints, as well as an essay on the early history of color printing. Other specialists add essays on how the prints were originally marketed and some considerations for print collectors today. An essay by Judith C. Walsh, senior paper conservator at the National Gallery, provides the best explanation available of the specialized mezzotint techniques used in French prints. Highly recommended for academic and larger public libraries.-Eric Linderman, East Cleveland P.L., OH (c) Copyright 2010. Library Journals LLC, a wholly owned subsidiary of Media Source, Inc. No redistribution permitted.

This exhibition and catalog are a welcome and assured first step to a long overdue reevaluation of color printmaking in 18th-century France. The essay authors rightly and convincingly argue that color printmaking was revolutionary: the artists developed new techniques in a break with the past and created new commercial demand for what was then seen as popular culture. In the introductory essay, Grasselli (National Gallery; exhibition curator) discusses, or more accurately, lists earlier often-futile attempts at color printmaking from the Renaissance to the early 18th century. Smentek (Hobart and William Smith Colleges) analyzes how the commercial advertising of prints embodied Enlightenment ideals as it developed and fulfilled society's demands for popular culture. Walsh (National Gallery of Art) describes how technical innovations, a more demanding standard of craftsmanship, and the introduction of new materials affected the aesthetics and production of prints. Collector Phillips writes with obvious enthusiasm about his personal discovery of the creativity of these neglected masters. The sparse bibliography signals academic neglect of this area. Previous research is outdated; most of the scholarly writing dates no later than the 1930s. The color illustrations are the most extensive visual document demonstrating the artistic creativity and technical innovation of the century. ^BSumming Up: Essential. General readers; lower-division undergraduates through faculty. J. Houghton Muskegon Museum of Art
More book reviews at iDreamBooks.com