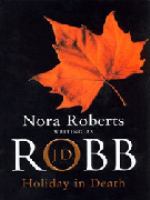 In the final weeks of 2058, guns were banned, and medical science had learned how to prolong life to well beyond the century mark. And man had yet to stop killing man. It was Eve Dallas's job to stand for the dead. No one likes to be alone during the holidays. For New York's most exclusive dating service, Personally Yours, it is the season to bring lonely hearts together. But Lieutenant Eve Dallas, on the trail of a ritualistic serial killer, has made a disturbing discovery: all of the victims have been traced to Personally Yours. As the murders continue, Eve enters into an elite world of people searching for their one true love - and a killer searching for his next victim. A world where the power of love leads men and women into the ultimate act of betrayal...

On the trail of a sadistic "Santa Claus" serial killer who is gradually working his way through "The Twelve Days of Christmas," homicide Lieutenant Eve Dallas is led to Personally Yours, an elite matchmaking agency, and the upscale clientele it serves. Colorful charactersÄand a few red herringsÄabound, and the patina of the holiday season adds a macabre dimension to the real horror of these murders in a fast-paced, superbly crafted story that is an amazingÄand possibly uniqueÄcombination of topnotch suspense, futuristic detection, and intensely romantic sensuality. Readers will be waiting for this one. Robb (Immortal in Death, LJ 8/96) is a pseudonym for best-selling, award-winning romance writer Nora Roberts; she lives in Keedysville, MD. (c) Copyright 2010. Library Journals LLC, a wholly owned subsidiary of Media Source, Inc. No redistribution permitted.

The year is 2058. Guns are banned and medical science has learned how to prolong life to well beyond the century mark. And man has yet to stop killing man. At Cop Central, it's Lieutenant Eve Dallas's job to stand up for the dead. So begins the seventh riveting installment in Robb's (aka Nora Roberts) futuristic romantic suspense series (following Vengeance in Death). With Christmas only weeks away, Eve is stressing out trying to find the right gift for her new husband, Rourke, who "not only had everything, but owned most of the plants and factories that made it." More to her concern is the latest serial killer who is using "The Twelve Days of Christmas" as a theme for his heinous rape and murder spree. The case touches Eve on a personal level, and while flash-backs from her abusive childhood are flinchingly repetitious, it defines Eve's gritty, hard-boiled character and validates her obsessive determination to bring down the killer any way she can. (June) (c) Copyright PWxyz, LLC. All rights reserved