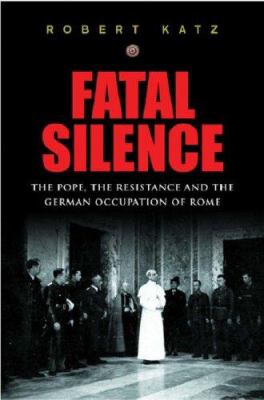 Fatal silence : the Pope, the Resistance and the German occupation of Rome / Robert Katz.

This is the epic story of the brutal occupation of Rome by the Germans after the fall of Mussolini in July 1943 up to the capture of the city by General Mark Clark in June 1944. Swelling to nearly twice its usual size with more than a million refugees from the countryside, Rome became a city of spies, double agents, informers, torturers, escaped Allied war prisoners, hunted Jews and hungry people. The city was the focus for four groups, each anathema to the others: the Allies, trying to capture Rome as their first shining prize of the war but discovering impregnable armour instead; the Germans, trying to throw the intruders back into the sea, holding Rome hostage and using it rapaciously as a supply line to the front; the Pope, trying to bring the West and the Germans to terms and save the world from Communism and the Vatican City from destruction; and the partisans, trying to redeem Italy¿s honour by making Rome untenable for the occupiers.