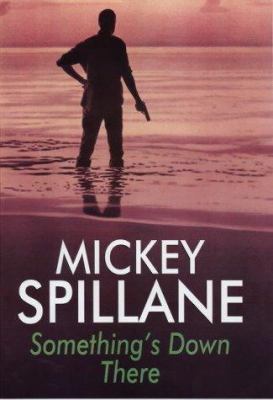 Something's down there / Mickey Spillane.

To the casual observer, Mako Hooker looks like any other grizzled fishing-boat captain trawling the Bermuda Triangle, but he's hardly your typical fisherman. Hooker is in fact a retired government operative taking a much-needed respite from his highly secret, highly lethal career in the States. But when local fisherman begin to fall prey to a mysterious sea creature the islanders dub the eater, he discovers the truth in that old saw about the spy game: You're not retired from the Company until you're dead. Is the monster a prehistoric beast rising from the depths? Or mines from a sunken WWII destroyer? Or the work of someone with an agenda even more deeply undercover than Hooker's? As he moves steadily closer to the truth, Hooker realises that someone (or something) is plotting to stop him, and only his rusty instincts will save him this time.

Yes, Mickey Spillane is still writing crime novels, having published his first in 1947. Here, former government operative Malo Hooker tries to forget his past by captaining a fishing boat around the Bermuda Triangle. Too bad something awful is bloodying his colleagues, compelling Malo to investigate. (c) Copyright 2010. Library Journals LLC, a wholly owned subsidiary of Media Source, Inc. No redistribution permitted.

Eighty-five-year-old Spillane (I, the Jury; Erection Set; Tomorrow I Die) shows little evidence of advanced age in this entertaining island adventure featuring ex-spook Mako Hooker and his Carib fishing partner, Billy Bright. Mako, retired on remote Peolle Island, devotes himself to drinking Miller Lite, fishing and boating, but he soon learns what aficionados of spy fiction already know well: you never really retire from the Company. Trouble arises on several fronts: a malevolent leviathan of unknown species begins slashing huge chunks out of the bottoms of fishing boats, and still-functioning WWII-era mines from sunken ships appear on the surface of the ocean, prompting the U.S. government to send in a team of agents and re-activate Hooker. Also in on the fun is ex-mobster Tony Pallatzo, now known as Anthony Pell, the head of a movie unit determined to capture the sea-dwelling monster on film, and lovely agent Chana, an old enemy against whom Hooker still holds a grudge: "for a second he wished he had been packing his .45 and the piece was in his hand with the hammer back so he could turn and shoot her guts right out of her beautiful belly and it would finally be all over with for all time." In Spillane's world, men still call women kiddo and baby and refer to each other as pals and buddies. True to his tough-guy heritage, Mako slays the dragon, finds himself a beautiful dame in the process and receives his just reward: "Muscles in her stomach rippled against his hands, saying quiet things that he could hardly believe." Classic Spillane. Agent, Philip G. Spitzer. (Dec.) Forecast: There are surely enough of Spillane's original fans left to rack up respectable numbers for this enjoyable flashback to an earlier age. (c) Copyright PWxyz, LLC. All rights reserved

This shaggy-shark story of maritime espionage and dangers lurking in the deep follows government assassin Mako Hooker out of a beer-soaked Caribbean retirement straight into a fishing net of intrigue. Rife with silly subplots, stock characters, and sloughed-off story lines--exactly how did hotheaded young agent Chana Sterling once accidentally plug Mako with hot lead?--this search for a boat-eating behemoth nonetheless proves a salty noir treat. Here's a taste: Hooker didn't turn around. He simply let his eyes slide up to the dirty old back bar mirror and he saw Chana at the same time she saw him and their eyes met and for a second he wished he had been packing his .45 and the piece was in his hand with the hammer back so he could turn and shoot her guts right out of her beautiful belly and it would finally be all over with for all time. There might not be any prehistoric predators marauding through the ocean, but one pulp dinosaur is still chewing the scenery and reminding readers of a glorious era in American fiction. --Frank Sennett Copyright 2003 Booklist

What a difference a half-century makes. The legendary hard-boiled master's latest seafaring adventure, less Mike Hammer than Ernest Hemingway, packs all the wallop of a newborn kitten. Mako Hooker calls himself a fisherman, and has a nifty boat, the Clamdip, and a Caribe captain, Billy Bright, to prove it. But the hush-hush government agency he retired from after a lethally successful career calls him an invaluable local resource when a series of vessels in the Bermuda Triangle fall prey to attacks by unknown causes. Could the boats be running into unexploded American bombs laid years ago? Or are the gouges in their hulls evidence of something with . . . teeth? When the Company sends down a crew under Mako's ex-colleague Chana Sterling to coordinate with Mako, there's a brief flare-up of Hammer's unregenerate voice ("for a second he wished he had been packing his .45 . . . so he could turn and shoot her guts right out of her beautiful body and it would finally be over with for all time") that's so anachronistic it's like seeing a prehistoric fish break the surface. Soon thereafter, though, the tale gets becalmed in criminal conspiracies that go nowhere (courtesy of smooth Hollywood producer Anthony Pell, formerly mobster Tony Pallatzo), a romance with Hollywood heiress Judy Durant that goes nowhere surprising, and a series of portentous hints about the mako shark that's following the Clamdip into dangerous waters because it sees itself, not unnaturally, as Mako's twin. It all ends with an unforgivably muffled finale that will leave an awful lot of readers wondering just what was down there. If Hammer's last case, Black Alley (1996), was an exercise in shamus nostalgia, this yarn regresses even further to the Boy's Own Adventure period, complete with the girl in the pink bikini the hero wouldn't dream of seducing. Copyright ©Kirkus Reviews, used with permission.
More book reviews at iDreamBooks.com